I've been doing these Sunday vignettes occasionally, so here goes.

Delal and I crossed the water to Europe.  We had brunch in the fish market--a very fresh plate of fried hamsi--and then took a tour of the Jewish museum near Tunel.  It was a pretty interesting display of stuff--I saw the Torah for the first time, and the Holy of Holies where the Ark resides.  It also had a display on the Jews of Istanbul--apparently, my neighborhood used to be a Jewish one.  There's an old synagogue I jog by sometimes circled by walls and razor wire. 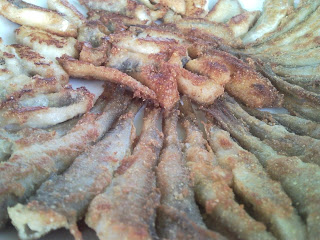 Anyway, after all this was done we went to the seaside where a red faced old man had set up a tea stall.  We sat down at a plastic table and relaxed in the first sun we've seen in about two weeks.  The Golden Horn was blue.  The sky was blue.  Something Delal pointed out:  The scene before us was built on layers of stillness and movement.  The ferries were darting frantically past each other, rolling in the waves.  The Sultan's palace stuck out over the tree tops behind on the other side, looking the way it has looked for centuries.  A line of fisherman sat rigidly still along the water.  Between us and them, hundreds of pedestrians passed almost as quickly as the ferries.  A group of old men sat around a table, barely moving.  Occasionally raising a hand and circling it in the air to illustrate a point.  A fight broke out between some other men on the corner--one had apparently ran off with the other's shoes during prayers at a nearby mosque.  We sat and sipped tea and talked until it was time to cross the water back home.

Here is a tree at the Sultan's Palace.... 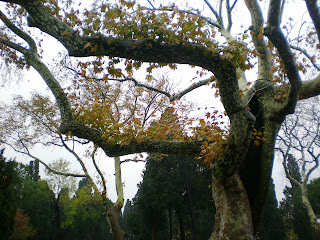 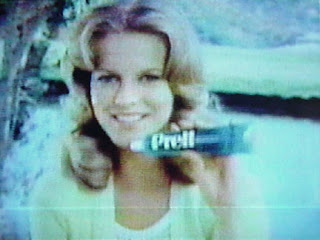 I claim to be a writer and don’t write, not even for a simple blogsite. (The job is currently sucking all the time from my day and soul from my heart). Well, I’m sticking something up here just to be sticking it. I don’t claim it’s Tolstoy.


So I figure there are a few people out there who picture my situation here in Turkey—teaching Middle School teens in Istanbul—along these lines. There’s a dusty rundown building in the midst of some sad looking houses. All the students from 5th to 9th are huddled over their slate boards in the same room, meticulously copying down whatever scrawl I scratch on the chalkboard. The girls are meek and sit with shy smiles, their hair covered in scarves. The boys will have to leave early for some apprentice work—perhaps at their father’s carpentry shop. In the distance, the melancholy sound of the call to prayer echoes and the students rise and drag out their rugs.

When I walked into my sixth grade class, three boys were lined up at the windows throwing paper planes to the playground below. I reminded them that I had threatened just the day before to toss each one of their heads out the window if I ever caught them at it again, and they all three swore they hadn’t thrown a thing.

‘You have an airplane in your hand right now, Canberk,’ I say.

Our basketball star Alp walks in. He says he forgot his notebook at home, despite the fact that I saw him with it in the hall. He starts to cry, huge glistening tears flowing down his cheeks. ‘Oh, oh, I need my notebook’ He’s a professional. I’ve watched him make himself cry for a variety of fake reasons—his school book was marked up, I didn’t give them enough homework, he wasn’t getting enough grammar. He won’t tell me how he produces the tears, but I think it has something to do with his own personal biology and how hard he rubs his eyes. The other day his eyes were burning and red pretty badly—for real—and he had to go to the school nurse for it. Perhaps he’d overdone it.

Eyes. What is it with eyes? Why don’t I just pass out the pins I use to hang up bulletin boards and let them all skewer their eyeballs and yank them out. It would be quicker. One boy had red eyes the other day, not Alp, but a kid named Berk who speaks in a high voice and reminds me an awful lot of Ralph Wiggum. ‘Why are your eyes red, Berk?’ I ask. ‘I sprayed Lale’s perfume in my eyes!’ he says. ‘Why would you do that?’ I ask. ‘I don’t know.’ Lale herself was once about to spray some kind of athletic cold spray into her friend’s eyes—the friend seemed a willing volunteer. She leaned her goony smiley face forward and said ‘Do it! Do it!’ before I snatched it away.

Lale is a tiny girl that sits in the front of the class. She wrote in her introductory letter to me the following, ‘I know I am supposed to write about my dislikes as well as likes, but I can’t because I don’t have any! I am perfect! PERFECT!’ The all-caps perfect was done in a red board marker she’d pinched from me.

Then there’s the girl that announced, at 11 years of age, that she was the sexiest girl in the whole school when I asked them to tell me their names and a talent. I saw her out in the hall the other day drawing pictures with two of her friends. When I asked what she was doing out of class, she said ‘Jewish homework’. I laughed. ‘No, really!’ she said. ‘I’m not lying this time! Religion class is now and we get to sit outside.’

‘And the Jews have to draw big balloon versions of boys’ names?’

I took it away. I have a whole collection from this girl. She uses my class often to create her name art. I have a folder full of it and think maybe it’s time to open an exhibition. Confiscating from students is fun. Yesterday I had to confiscate no less than two laser pointers, an I Pod, ten rubber band animals, four pairs of rubber gloves, a ping pong racket, and a cell phone. The cell phone was absolutely necessary despite all the rules against them because the kid was going to call her mom after school to let her know when water polo practice was over.

I ride a service bus to school—all the teachers on my side of the Bosphorous ride the same one. There’s a guy on it I call Prell, because his hair is absolutely perfect. It shines, it glows. He should be standing outside and swishing it back and forth in the wind. Sun glistens on it. Even the dreary florescents in the break room glisten on it. It’s styled like something out of the seventies, feathered my sister called it, which is why I dubbed him Prell instead of something more modern like...what? Fructus? In front of him sits one of the primary teachers with her offspring, a girl of about 8 who seems to need the heater on full blast even when its 70 degrees outside. ‘My baby will catch cold’, the mother explains. She reminds me of a rather shabby looking peacock for some reason. It’s something about the way her hair fans out and pushes forward, and about the mother bird-like way she treats her kid. I just know she wants to sit on her and shield her from the rest of us with a big tail-fan of warm feathers. And of course from the debilitating ravages of fresh air, a thing all Turkish mothers fear. Yesterday, dripping with sweat, I cracked the window next to me and pressed my face into the tiny opening. For the first time in the past two weeks, I welcomed the rain (It’s been raining forever). It was cool, refreshing. The Peacock ‘pssst’s me and says, ‘Pardon, would you be so kind as to close the window? My daughter...’ She smiled wanly. I give her a very nasty look—it really is 70 degrees outside, and the heater really is full blast--then comply for whatever reason.

Everything is computerized in the class room. Attendance, the smart boards. I am struggling to turn my usual white board scrawl into snazzy power point presentations. We had a Jewish man from the local community come and speak to the 7th graders about Anne Frank, the Holocaust, and prejudice in our super high tech Nautilus Auditorium. Some of these minorities need to get it together a bit, is all I have to say. Here is how one conversation went:

Student: Why are black people and white people different?

The Speaker: Well they’re not, as we have discussed. If you cut a white man’s arm off what happens?

The Speaker: That’s right. And if you cut a black man’s arm off?

The Speaker: That’s right. You see, there are no real differences. We’re all humans. (HE SHOULD STOP HERE AND TAKE THE NEXT QUESTION, BUT DOES HE? NO! JOY OF JOY’S, OUR LECTURER ON TOLERANCE AND PREJUDICE CONTINUES) Actually, culture can be a big factor. The blacks (I am quoting,remember, I didn’t say it) grow up in a different environment, more physical, outdoorsy. So naturally they are better athletes than us. You grow up here, so naturally you are good at things like...I don’t know, science and art.’

I groan so loud that half the auditorium looks at me with a quick sideglance. What is it with people? Only your own minority can be stereotyped and mistreated? If you do it to others, it’s perfectly fine?  Here's a discussiong topic:

Now that I am a minority here in Turkey do I get to say all sorts of racist things, but have it all be okay?  Or does me being a non-minority back home make it off limits?  What do I need to do to get legit enough to be a bigot?  Is marrying Delal enough?  She's a minority.  Do I need to apply for Turkish citizenship and be an official minority?
Posted by Jeff Gibbs at 3:41 PM 2 comments:

Fall cool. While eating brunch with Del, we hear a bagpipe coming up the road.  Delal runs upstairs to get some lira.  I go out on the balcony and peek down through the laundry to see two chubby people my age marching down the middle of the road--a couple.  The man wears a white shirt and a red sash.  The woman a colorful kerchief and gypsy skirt.  She plays a tambourine.  Del fills a plastic bag full of coins and shouts down to them.  They lift their instruments and laugh.  We toss the money down (It nearly hits a car) and the shout up "Tesekkurler!" in accented Turkish.  "Gyspies?" I ask.  "Balkans'" Del says.  "Probably Macedonian refugees."  They continue down the street turning slow circles as they go, looking up at all the buildings with their laundry lines billowing with sheets and T-shirts and skirts, hoping for another coin fall from a window.  A white cat looks disdainfully down at them from the building across from us  (her picture is down a few blogs).  They start to sing, the man the main melody, the woman the harmony.
Posted by Jeff Gibbs at 4:00 PM No comments: