It’s been a while since I’ve written—I know. I would like to start up again by concluding the travel log I’d started about our October trip to the Aegean coast and the fabulous city of Pergamon.
The ruins of Pergamon are on a large hill north of the Turkish town of Bergama. It is easily the most stunning ancient site I have seen in a country inundated with them. The history here is dense. The church of Pergamon is mentioned in the Book of Revelation as one of the churches of Asia that crazy St. John was sending his letters to. It’s called “a dwelling place of Satan” who had his throne there. Well isn’t that special. It was also the place where parchment was invented and boasted the greatest library in the antique world, with over 200,000 volumes, second only to Alexandria. The Roman physician Galen was born there—the most famous doctor in the ancient world and one of the first practitioners of psychotherapy. To the north of the main town are the ruins of an enormous medical complex called the Asclepion where people from all over the Roman empire came for treatment. The city was also a center of the arts and boasted an enormous theater along a steep ridge that still stuns to this day.

In short, it has quite a pedigree. 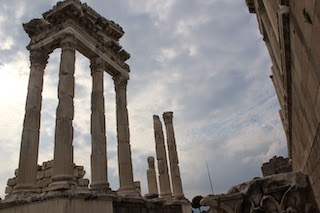 We took the funicular one-way up the hill and walked down through the ruins, though the woman at the ticket booth tried to talk us into a more expensive round trip. Most people seem to fall for this as we encountered absolute no one on our stroll down through perhaps the main and most interesting part of the ruins.

The theater is a must-see—the steepest theater in the world with a seating capacity for over 10,000 people. You emerge from the colonnaded tunnels beneath the Imperial temple onto a steep stairwell with a dizzying, breathtaking view of all the mountains around. It’s hard to imagine how anyone could have concentrated on a play with that view in front of them. From the theater we walked down the ancient Roman road, still paved with brick, past the Altar of Zeus (the most interesting parts of which have been moved to the Berlin Museum), one of the seven wonders of the world and the thing John of Revelations meant when he said “throne of Satan.”

It was after this road that most of the tourists vanished and we were left alone in the vast lower levels of the city. We toured the sports stadium—all vine and columns and red dust. Everything was absolutely silent except for the wind on the brick and weeds. There was a feeling that everything was too old to even be haunted. Above the stadium was the house of one of the governor’s of Pergamon—the mosaic floor and decorations still intact. This was one of the most fascinating parts of the whole city—for here you could imagine what everything would have looked like two thousand years before, what it might have felt like to come home and sit down to relax after a day’s work for a Roman government official.
We emerged from the city walls and crawled under a fence at the bottom of a hill, then walked to the Red Basilica in the middle of the town of Bergama. It looks like a crumbling cathedral of broken brick but is actually much older than Christianity. It used to be a temple to the Egyptian gods, apparently, a concession to Egyptian expats living in the city. And what a contingent their must have been for such a grandiose monument! You can still find pieces of Serapis and Isis and Set and Ra in the shambling red towers. There is one intact tower and when you first enter it from the sunlight, you are immersed in utter darkness. Around the walls are statues of Egyptian gods—half animal, half human--and in the center a podium with a secret entrance from which the priests used to speak to worshippers—a disembodied voice from the Egyptian underworld. The Lonely Planet claims this was the place John meant by “throne of Satan”, not the Zeus altar, and it certainly feels more demonic, more frightening. 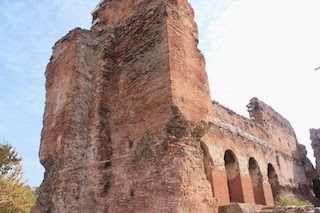 Delal and I visited the medical complex of the Asclepion last—and I think this was her favorite part of the whole trip. It’s such an extensive facility with mud baths and massage parlors and a building for the treatment of the insane and a hot springs and a sleeping center where doctors would listen to people’s dream rantings for an explanation of their illnesses. A long road from the main city of Pergamon—about a mile in length—was completely covered to prevent people from being affected by the weather.

I am always fascinated to walk these old roads, especially the ones that emerge out of the brush and vanish back into it. The greatest lengths of them lie under the ground—you can feel the presence of this buried network of phantom highways and sideroads, all connecting a vast array of cities and towns long dead and vanished, invisible under the modern map. I always think of the millions who walked and drove them, and now my own footfalls added to the history. The paving stones of the Asklepion road have been worn smooth by centuries of feet—no ruts because no wheeled vehicles ever traveled here.
Most of the hotels and pensions in Bergama were unnecessarily expensive—“boutique” if you will. The Hera told us over the phone that since we were Turks, she would give us a discount—which of course means she regularly overcharged tourists. Never mind that neither of us were Turks. We finally settled on the Odysseus Guest House, located in a historic Greek mansion being refurbished by group of grad students and run by an extremely nice guy who did not try to overcharge us in any way. Highly recommended—it boasts a nice view of the old city and the Acropolis from it’s terrace and a copy of the Odyssey—extremely relevant to the whole area, sits on the night stand in each room. I read all the chapters on the places we had spent the week traveling through.


On our drive back to Istanbul we stop by the Kuş Cenneti (Bird Paradise) wildlife sanctuary near Bursa—a rapidly shrinking and according to the covered lady who worked the information desk, dying refuge for migratory birds. Chemicals from the poultry plant on the shores of Lake Manyas are leaking into the birds’ habitat, and dams and agricultural run off are wreaking havoc on the environment. You cannot approach the lake too closely. There’s an observation tower and the park headquarters lends you a pair of binoculars. We looked out from the top deck at what looked like the white reflection of the sun all along the Southern shore. Then bits of the sunlight rose and began to fly and that’s when I realized that what we were seeing were hundreds upon hundreds of white pelicans. There were flamingos too, wading for fish and egrets, storks, cormorants, spoonbills, and herons.  Despite the ecological disaster we knew was waiting for these birds, despite our distance from them there in that tower, there was still something majestic about them, hundreds of them taking wing at once and crossing the sunset sky.
Posted by Jeff Gibbs at 1:23 PM 1 comment: