Serendipity 3--The Bottom Falls out of the Bucket in Hatay

From Antep to Antakya by bus. I remember the clouds gathering over the mountain peaks. They kept building and building, higher and higher until they roiled twice the height of the mountains themselves before the first strands of storm began to snake down the other side toward us.
﻿
The morning we woke up in Antakya, it was raining outside—a warmish rain, but nevertheless, how were we supposed to spend our day in a city where most things you wanted to see and do involved walking around outside? We’d planned to go up to a ‘little picnic place’ in the mountains called Harbiye. Someone had recommended it, but now? Despite the weather, despite our forebodings, we boarded the minibus anyway and started up into the mountains behind Antakya.
The Mediterranean mountains around the city are gorgeous—lime stone cliffs and rocky outcroppings covered in a lush foilage of vine and trees. In one cave just outside of town is an old church where Peter and Paul preached to the first Christians. We had gone there the day before, walking up the The Mountain of the Cross through the back streets. It was a quiet place—Crusaders had built a facade outside a thousand years before. Inside was an empty stone chair, an altar and the remnants of mosaics. There was a Japanese tourist reading bits of the Bible, and some Turkish covered ladies taking turns taking pictures in the stone chair.
In the far corner was a small pool of water fed by drippings from the cave walls. A little tin bowl floated on the surface. When everyone had left, I went over, bent down, and took a drink. The water was pellucid, cold and slightly musty. The tin bowl bobbed up and down on the ripples my hands made. I thought of my trip to Kamakura two years ago with Kuniko and the well at the Kaizo Temple. The Sokonuke Well is one of Kamakura’s famed ‘ten wells’. It stood to the right of a leafy courtyard—the leaves of the autumn trees gold and red. It had the same clear water, the same musty scent as the cave of Saint Peter. Instead of a bowl, a fallen red maple leaf bobbed on the ripples caused by the wind. A noble woman of the Uesugi family named Chiyono was working at the temple. One day she was carrying water from this well. The moon was reflected on the surface. Suddenly, the bottom of the bucket fell out, the moon vanished, and ‘the spiritual darkness fell from her mind.’ She experienced a satori.
I stared at the dim light streaming in from the doors as it broke into white and shadow in the water and thought of the poem she had written about that night
With this and that I struggled
And then the bottom fell out of the bucket.
Where water does not collect,
The moon does not dwell.
Our bus wound up the mountain and the rain increased. By the time we got to our stop, it was pouring down hard and we ducked under the awning of a hotel to avoid getting wet. Then Delal put on her jacket and hood, I pulled off my jacket and threw it over my head, and we marched down a dirt road that dove into the trees, winding between roadside stalls that were busily packing up as the rain fell harder.
We expected nothing, and were rewarded with magic.  Just past the stalls, to the left, was a waterfall splashing down a small outcropping of rock. It went under the road and emerged in two enormous cascades of white crashing water—in between the two falls was a cafe. A little ways down was another set of water falls, even larger than the first. They formed huge pools and ponds that in turn slowly drifted toward another set of rocks to become yet another set of water falls. At one point, small paths branched off passing under arches of falling water. One cafe had tables set out in the pools and you would wade ankle deep out to your seat, I suppose, if you were going to sit there. Only there was no one there—that was the beauty of the rain. The sound of water was everywhere—a thousand drips, great dollops, gurgles and babbles and trickles over rocks, the faraway roar of falls and the strike of raindrops on leaves. But no people.  And the green, in the fresh rain the green on the sycamores and laurel trees seemed like a flame leaping off the leaves. We stopped at a cafe for nargile, and smoked peach and mint flavor as beside us flowed a rushing river—the water running white from a water fall in front of us to another behind us. The rocks were covered in ducks and geese standing in the rain. The smell of wild mountain thyme came in with one breeze and then was swept away in a chill draft from the water. 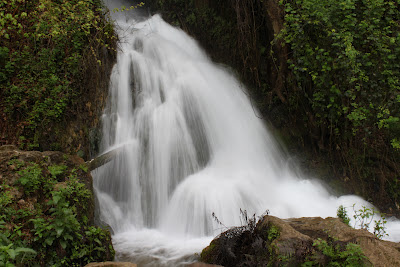 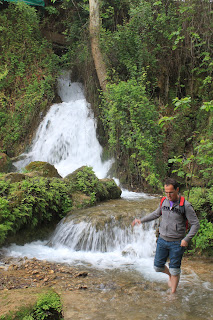 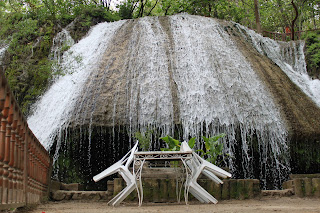 I couldn’t get the red leaf back in Kamakura out of my mind. It’s edges were folded gently inward so that it formed a little boat on the well water. And here we were surrounded by water. A bottom had fallen out and left us here.
The cafe has been built around the sycamores, so that the great trees were everywhere you looked.  According to Greek myth, this was the place that the god Apollo chased the water nymph Daphne. She prayed for help and the earth opened up and transformed her into a laurel tree. Her name ‘Defne’ means laurel in Turkish.  It looks like a whole country of water nymphs exploded here.
The sun came out, shining bright beams of butter gold through the trees, and brought cackling bands of tourists up from Antakya—a group of University kids walked up the path shouting and laughing and the spell was broken. We walked back up the path to the bus where old ladies with Arab accents were selling laurel soap and laurel oil and of course, ashtrays (of paintings from Antakya’s tile museum), towels, T-shirts, Syrian whiskey and whatever else they could hawk. 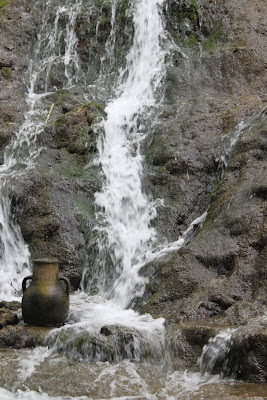 Later that evening we were walking near the old streets around the Orthodox church, looking for one restaurant when we found another—called Leban (white in Arabic according to the waiter). We decided to give it a shot. It had a terrace that overlooked the courtyard of the church and a large part of the city and turned out to be some of the most delicious food we had the whole trip. The best of which was a plate of hummus. They spread the hummus to the edge of the plate until it formed a little bowl and then filled that with melted butter and a sprinkling of cumin—easily the best hummus I have ever had in my life.
Here is the story of the Lady Chiyono and the well—from the www.everydayzen.org website
In the eighth lunar month of the following year, the full moon was shining. Chiyono went to draw some water from the well. As she did, the bottom of her bucket suddenly gave way and the reflection of the moon vanished with the water. When she saw this she instantly attained great realization. Carrying the bucket, she returned to the temple and found the elderly nun. She said, "The one moon of self has illuminated the thousand gates of the dharma." Then she made three prostrations in front of her teacher.
Posted by Jeff Gibbs at 2:45 PM No comments:


For the past few months now I have from time to time been translating and posting portions of Tuba Çandar’s biography of Hrant Dink. I did so without her permission and am writing now to apologize for that. I never expected anyone but my family and friends to be reading it, so it never crossed my mind that I was invading someone’s right to their creation, but I was. Also, in my introduction to the first translation I said this, ‘Tuba Candar does not so much as write the book, as shape what already exists. The writers are the hundreds of friends, relatives and coworkers that loved and admired Hrant. They tell his story from birth to death—giving a kaleidoscopic variety of views that flesh the man out in a way no single author could.’ I never meant to imply, of course, the Mrs. Çandar did not ‘write’ the book in the traditional sense of writing labor, nor that she did not put in an inordinate amount of incredible, backbreaking and impressive work into it’s genesis, and any understanding otherwise is regretfully mistaken. I had nothing but admiration for the mammoth job of creating that book.


Jeff Gibbs
Posted by Jeff Gibbs at 8:39 PM No comments: