The Kurd and the Cracker in Thailand--Part 1 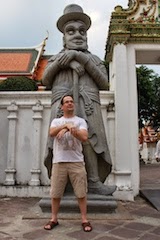 Title makes it sound like breakfast somehow, curds and crackers.

To be honest, I find myself often questioning the worth of travel blogs these days. It’s eye catching, people might ping a picture or two, but it's somewhat boring and two-dimensional if you ask me—even when people do interesting things. Now I like to hear about a good adventure in another country as much as anyone, but the work of writing is such an intensive and special process to me, an aspiration to sublimity. That’s right. (And I mean it, too) If I write a travel blog, I'd like it to get at something I care about at least.

So here is my attempt.

During my fall break in November, Delal and I took a trip to Thailand. I’d had dreams for several nights about what our trip would be like—there was a kind of anthropological curiosity in the back of my mind about what a Kurdish woman from Istanbul, born and raised in the Kurdistani mountains, would make of tropical Bangkok. And a lover's curiosity about how Delal herself would react to something that had been, however much in the background now, an important part of my life--Asia, where I had lived and traveled for five years as a youth. I had heard the perspectives of my own countryfolk until I could recite them by heart, but what would she think? What would make an impression on her? 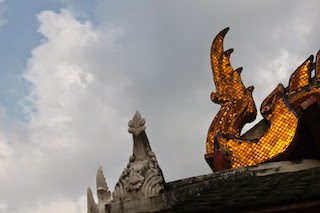 We were coming at a strange time, at least for people who’d lived through the last few years in Istanbul. Thailand is currently in the hands of a military coup, run by a man, who, like our own Dear Leader, controls the country with a fatherly iron fist. Like our own Dear Leader, he is taxing alcohol and other vices because he thinks it’s bad for you, and like our own Dear Leader, he is throwing protesters in jail willy nilly and making like it's for their own good. The day before our arrival five students had held up the three fingered salute from the Hunger Games to the reigning Prime Minister Prayuth Chan Ocha. They were promptly arrested and taken to a military camp for “attitude adjustment.”  Prayuth said something patronizing to explain their detainment--I'm glad their brave but they must learn to use their bravery properly--and military police were stationed outside some theaters in Bangkok to catch people doing the same thing.

Prayuth and Dear Leader have a lot in common on the whole, but these sorts are a tribe. They make up the secret cabal controlling the world that they're always ranting about. Power, I think, hones away certain parts of a human being until finally it cuts away enough flesh and blood that it reveals the same monster underneath—whether you’re in 21st century Thailand or Turkey, 20th century Russia or the Germany of China, 19th Century India or a 2014 Citibanker and his Congressional stooge in the United States—or anywhere and anywhen else for that matter. Anyway, PM Prayuth does not like the Hunger Games or booze or anything that harms the morality of the noble Thai people .

Of course, we saw none of this political topsy turviness. Nor would anyone touring Turkey ever really notice the creeping government authoritarianism. Even expats living here might never notice if they didn’t go looking. We did see one group of college students next to a Bangkok metro station in Makkason—they were in a weed-strewn vacant lot dressed in gas masks performing some sort of outdoor theater. Some did stunts on BMX bikes. The way they were dressed reminded me of the characters in the murals of PixelPancho in Kadıköy—faceless, highly symbolic, slightly menacing. There was also a strong police presence in the subway stations--cops rummaging through everyone’s bags, but that might not have been out of the ordinary. Who knew? We were new.

We stayed in Chinatown, Hua Lamphong. The walk from here to the old city was an adventure in itself—nearly a mile of sidewalk food stalls each seeming to serve a completely different dish. The variety was dazzling and was all Delal could talk about—how could there be so many different kinds of food???? And this was just the Chinese section of the city. Dozens of varieties of mushrooms, fresh and dried, baskets upon baskets of local herbs and greens--kaffir limes, lemon grass, Pandan leaves, Thai sweet basil--and many others I had no idea what was. It was like an exhibition of Asian cuisine—and all so cheap! We had a lunch of two bowls of duck noodles, a seafood salad, and two fresh coconuts macheted open for the juice inside all for about eight dollars, and this was one of our more expensive meals. 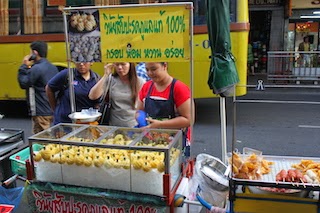 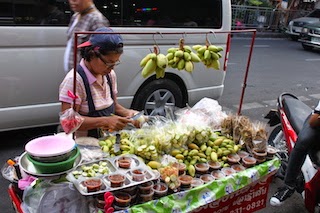 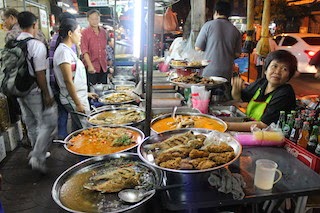 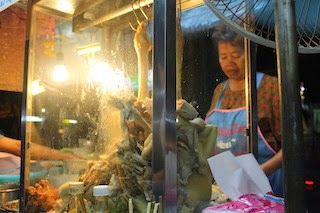 Delal noticed one major difference between Bangkok and Istanbul right way. In Istanbul all of these vendors would have been harassing us—buy this buy this buy this!! And they would also all have been men, men who would have been helloing us to death, trying to drag us into their shops or simply staring and staring. Women, Delal said, would be investigating through surreptitious glances, her clothes and hair and demeanour, giving knowing glances to their friends or tsking or maybe even approving—but no matter what, constantly judging. Here, no one seemed to notice us. And when we ordered, they spoke English if they could, didn’t fret if they couldn’t, and didn’t make a big deal out of our foreignness. They didn't even seem to notice.

We made our way through heat and choking air pollution to Wat Pho—one of the city’s oldest and grandest Buddhist temples and it was here that memory kind of flooded the world. As I stepped through the gate, there was this tingling in my gut and the past suddenly boiled up and superimposed itself on the present. It was such an odd sensation. I had been here alone fifteen years ago, first earning to practice meditation. I remembered the younger me—overwhelmed with the smells of the incense, the hot tropical air and the ornate walls covered in multi-colored mirrored tiles, the golden flame shapes on the sharp sloped roofs. I remember walking the quiet mazes filled with statues of the Buddha and the feeling of looking into a kind of wisdom for the first time, one that I had always speculated was there and had not yet dared to delve into due to childish fears from the Puritan Evangelism I had grown up with. 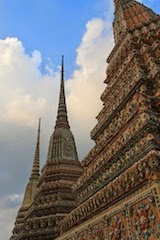 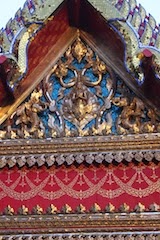 I walk into the hall housing the main image of the Buddha and remembered vividly walking into the same hall fifteen years ago. I am barefoot and in shorts, drunk from the sensual warmth after having frozen in Tokyo’s winter. There is a light scent of incense, the sound of a bell that seems to clear the air of other sounds and thoughts and restless things. Under a towering ceiling is a gigantic golden statue of the Buddha meditating in the lotus position. He sits on a pedestal of gold, surrounded by other gold statues of Ananda and other disciples.  The walls are tesselated with murals of classic Thai scenes of temples and gardens in a labyrinth pattern. 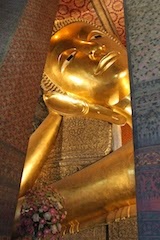 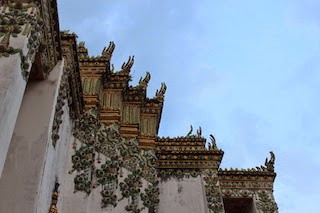 I feel then and felt now a sense of “This is it!” Not that I wanted to become a Buddhist but that I had found something, spiritually or intellectually, that I had been looking for all my life. My mind quieted a bit here, maybe for the first time ever.

We continued walking this temple, me in this disorienting confluence of then and now. I seemed to be seeing everything in double. It was deepened with every new thing we saw--I spent 6 months wandering Asia, doing a kind of unofficial impromptu spiritual quest that changed my life though not as much as it could have if I had really let go and given myself to the place. Every object here reminded me of that me, of life's potential as I was so vividly aware of it then. The monk in saffron robes, the hall of the reclining Buddha, the line of prayer bowls and the sound of chanting flowing over a quiet city dusk. 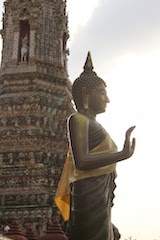 Afterwards, we repaired through a maze of deserted riverfront alleys (Why were they deserted, the Istanbullus ask!) to a high-priced café on Chao Phraya River and sipped fruit shakes—Delal’s pineapple and mine mangosteen. Party barges glided by. The lights of the city broke and reformed on the waves. Bouncy traditional Thai music swelled and receded. Across the water was the ancient Hindu-like towers of Wat Arun. Through a haze of jet lag, Delal told me she loved Thailand.