Off and away, or Uf and Away 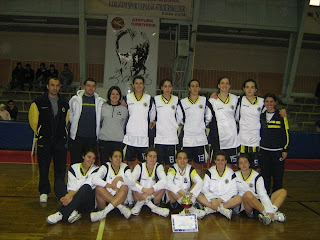 So for the first time, I got the point of this monkey training camp called a 'school'. The girl's basketball team had their final championship game and the whole high school trucks down to the courts in Kadıköy to watch. Our boys (and some girls) formed a formidable wall of trash talking hooligans at the railing that pissed off every free throw attempter on the other team. During a break between quarters they turned to me and started chanting my name as everyone in the stands turned to see what the hell a Jeff was. The last minute of the fourth quarter it was 60 to 60. The other team scored 2, we scored 2. They scored 2 more and we scored 2 more. When the buzzer sounded it was tied and we went into over time. The rivals got 8 points ahead, our coach turned bright purple from screaming, and then we caught up with a 3 pointer and then another 3 pointer and then a regular old slam dunk. We were at the last 5 seconds again and again we were tied--no one could make any headway, basket after basket was blocked. Then Özge, one of my favorites and third from right in the top row, threw the ball. It was in the air at 4, 3, went through the net at 2 and we were on our feet at 1, cheering wildly and loudly enough to drown out the buzzer at 0. The other team literally collapsed to their knees in disbelief. I felt for these girls...they had played ferociously. All in all, a stunning game, and better than any Celtics match I have seen.


It is the last day of exam's week, before the April 23rd holiday (Children's Day). I took my 8th period class out on the field for conversation class. There were only three of them and I didn't feel like bullying them into a lesson. First was too-cool-for-school Doğukan. He kicked back in the soccer dugout and watched the dance the 10th grade girls were preparing for a festival in May. 'They look so retarded,' he says. Then he gestures to the 11 grade boys playing soccer. 'And what the heck are those bozos doing.' Tuğba, the star of the girl's basketball team (sitting, second from the right), told me the gossip the students spread about different teachers. Ismet, for example, can be easily distracted from the lesson and has different sized ears--one enormous, the other like a little mushroom. The third student is Kaan, who keeps running over to the elementary school kids and trying to take their soccer ball. The field is carpeted with bright butter yellow flowers. It is absolutely breathtaking. I must admit, the 10th grade girl's dance routine cooked up by the kooky music teacher and her male companion, is a little on the stupid side. We watch them go through their routine with all the enthusiasm of a cat taking a bubble bath. Sun, cold wind, and vendors voices calling from the bazaar across the street. There's a gymnasium being built though no one's worked on it since September. A huge wall separates us from the construction site. 'See that wall,' Doğukan says. 'That's our own personal Berlin Wall. Totally stupid.' 'You're the living example of too cool for school,' I say. 'You know that? You don't do sports, don't join in any of this festival stuff. What do you do exactly while everyone else is busy?' 'I chill,' he says. 'And I surf.'
Posted by Jeff Gibbs at 3:56 PM