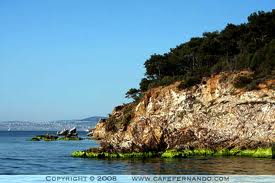 We weave among the weeds, among puffs of pollen yellow and white. A path cuts through the underbrush. In the brush, we gather lavender flowers. Their soapy smell soaks the air and our fingers and our shirts.


‘It’s not regular lavender,’ she says. ‘It’s called ‘Black Headed Lavender’. You boil it to make blue tea, which, everyone on the island tells me is, great for memory.’

The path ends on the red cliffs. There is a red rock stairway in the cliffwall and we zig zag sliding down, back and forth among the thistle and juniper and brine. A green peninsula of grass and rocks just out into the sea back toward the other islands and Istanbul. There’s no garbage yet because the season hasn’t started. We are alone.

A boat teeters against the white sinking sun, the shape of the sail blotted out by light. I take off my shirt, and for the first time in months, feel the touch of ultraviolet on my chest. Every cell tingles and unfolds itself to the sun. She sits beside me. I rest my head on her shoulder—the wool fibers of the sweater hot from the same light that heats the rocks.

‘This is Martha’s Beach. There was a family that used to live in that stone house there, just inside that copse of cedar or pine or whatever. The mother was Lebanese-Armenian, and everyone kind of made fun of her for being Armenian. And she was different in other ways, too. They said she would go swimming here in the nude, do different crazy things. And so they made fun of her, you know, for like a long time until one day, she went out into the water and drowned herself.’

The shore crackles with waves on white stone streaked with sharp stripes of rust orange. We call out ‘Martha! Martha!’ A seagull sits motionless on a rock in a puddle of light.

‘I wouldn’t say that too loud,’ she says. ‘Martha’s children still live in the house.’

The stone cottage is surrounded by garbage—plastic chips bags, a blue pipe, an armless doll with the eyes burnt white by the sun and sea. Two teenagers are camping beneath a clearing in the pines. They poke sticks in the water and wave as we pass. The boy has a long scruffy dark beard, the girl puffs and puffs of tight curly hair. They wear black concert T-Shirts.

‘In the summer, all sorts of people stay here. They build rock shelters in the trees or wood huts.’

The path that leads up to the road is guarded by a pony-sized white dog. He is not looking at us, but sniffing the wind, his ears down and his eyes half closed. He belongs here. As we pass, he moves in front of us and leads us up another flight of stone stairs that are now wearing away and crumbling. We slide over pine straw and gravel—hang on to shrubs as we move up. The dog looks back when we struggle.

At the top, he turns back and starts the return descent. Between twig and branch and trunk and shrub, you can see an orange plasmal glitter—the kids have started a fire in the beach.

The wind is cold up here on the hill. It swirls down past the houses, runs along the empty streets and loses itself in the wall of trees that hide the paths to Martha’s Beach. We follow the road down toward houses, past an old monastery, past the almond trees and their pink blossoms and the caretaker’s shack with gourds hanging on strings.

The sun is setting—the city across the water is being swallowed in a pink smog. The sun is spinning down into the horizon and everything is filled with the sound of wind moving through it as if the breaths of the island itself were withdrawing back down into the way we came, into the rock and weed and stone and sea.

I pull her close to me and bury my face in her black hair. She smells of heat and cut lavender and gathering bees. There once was a whole field of lavender, on the opposite side of the world. The girls were just eight then—it was before almost everything. And the swaying purple reached all the way to the low green hills and there was ice cream and a horse for the tourists and a woman in yellow shading her eyes and old friends laughing as they sank deep deep into the flowers and remained there, waiting all this while.
Posted by Jeff Gibbs at 9:37 PM

Email ThisBlogThis!Share to TwitterShare to FacebookShare to Pinterest
Labels: My Lit

Love the new photo! Where was it taken?