A LETTER FROM A HUNGER STRIKER

I want to get away from writing political stuff--but we are up to our necks in it,and the water is rising. Delal's dad entered the hunger strike last week, along with about 10,000 others. To say we are freaked out is an understatement--he is diabetic, his cell mates have heart disease, kidney disease. I'd say it is a mark of their desperation. In any case, it worries us to death. Their demands were basically agreed to on Tuesday by Bulent Arınç (the vice Prime Minister), and we waited all week for some sort of concession. Nothing changed and so the hunger strikers continue--this is a letter from one of them released by gitamerica. I am reprinting it here. A transcription is at the bottom if you can't read it.
Gulan Kılıçoğlu was a 4th year student at Ankara University, Faculty of Political Science when she was arrested under the pretext of the Union of Kurdish Communities (KCK) operations and have been on a indefinite and un-alternated hunger strike since September 12, 2012. She was arrested on April 1, 2012 and sentenced to 6 years and 3 months for being a member of an illegal organization. Judge decided that it is against the course of the life for her to go to the Hewler and conduct a research at Selahaddin University as a student in her sentencing.
See a video of Gulan singing in this link: http://www.youtube.com/watch?v=2qd1UnK9REc 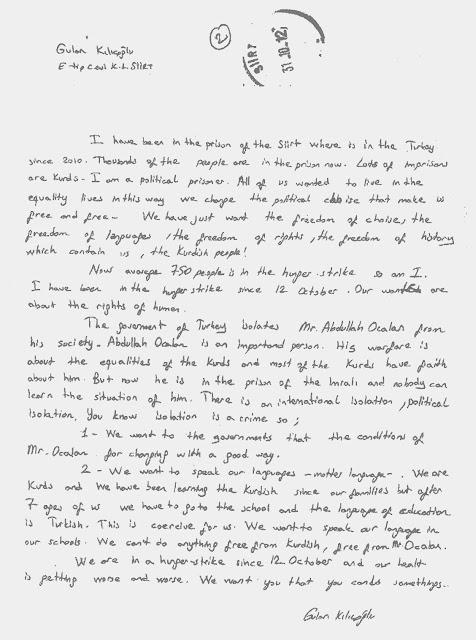 I have been in the Siirt Prison in Turkey since 2010. There are thousands of people in the prison now. Many of the prisoners are Kurds. I am a political prisoner. All of us wanted live in equality. In this way we can change the political choice that makes us free and free. We just want the freedom of choice, the freedom of language, the freedom of rights, the freedom of history which contains us the Kurdish people!
Now there are about 750 people on hunger strike, so am I. I have been on Hunger Strike since October 12. Our demands areabout the rights of human beings.
The government of Turkey isolates Mr. Abdullah Ocalan from his society. Abdullah Ocalan is an important person. His warfare is about the equality of Kurds and most of Kurds have a faith in him. But now he is in the prison of Imrali and no one can learn about his situation. There is an international isolation, political isolation,
You know isolation is a crime so;
1-     Want government to change the conditions of Mr. Ocalan in a good way.
2-     We want to speak our language – mother language- We are Kurds and we have been learning the Kurdish since our families but after the age of 7 we have to go to the school and the educational language is in Turkish. This is coercive for us. We want to speak our language in our schools.
We can’t do anything free from Kurdish from Mr. Ocalan.
We are on a hunger strike since October 12, and our health is getting worse and worse. We want you to do something….
Gulan Kilicoglu

Hi Mr Jeff. My prayers are with your family and also for your father-in-law's health. My best from the states. --Kevin