(Translator's note--last night, September 20th, was the last day of this hearing. Out of the 97 prisoners, three were released yesterday, but not my dad-in-law. Of course, a release would have meant little since all those 'released' are still being prosecuted. They just don't have to wait in prison while it happens. Still, it would have been nice. And with all the jabber about the peace process and Erdoğan's Democracy Package, we had been stupidly if slightly hopeful. Whatever. What more can you expect from a trial that from the very beginning has been a sham in such an obvious way that its painful to relate, painful to both the heart and the brain. And yet, at the end of each of these hearings we have hope, all the feigned indifference is lost and it kind of burns a little when that hope is violated. And it burns when I watch my wife suffer and her family suffer yet again. And then, with that fire inside, sitting in a bar at an event to raise money for an American friend who'd been beaten and deported by Turkish police, I faced an ethnic Turk who grew up abroad and who, for all intents and purposes, is culturally Australian. And when I answer that I'm married to a Kurdish woman, he says, with a note of disgust, 'It's people like you who are dividing this country.' Do I laugh, cry, punch him in the face? Or sit there trapped with him for another hour? The last is the correct answer and in a way it seems symbolic of our position as a whole.

FROM THE CUMHURIYET NEWSPAPER 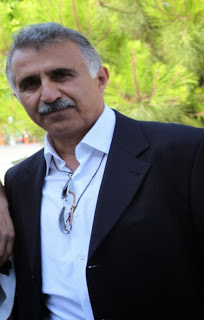 Suspects in Istanbul’s number 1 KCK trial revealed that they would not present their defenses as  they were expected to pay for their own court translator. Lawyer Sinan Zincir said, ‘This is hypocrisy on the part of the the party in power.’ While Lawyer Ercan Kanar added ‘Even in a Fascist state, no one would be made to pay a fee for speaking in their own language.’ The court refused all formal requests and only when the translators agreed to voluntarily provide their services so as not to victimize those in custody did the trial proceed to the formal defenses. Imprisoned suspect and retired teacher, Kemal Seven said that on September 12, 1980, 300 of his books had been seized and destroyed while 30 of his books were taken during the KCK operation.


‘For more than forty years,’ he concluded, ‘The system has been terrified by books.’


(September 12th was the date of the military coup that wreaked havoc on Turkey for decades to come, and this hearing was the 23rd anniversary)


Istanbul’s Severe Penalty Court 15 sits across from Silivri Prison and was built to house mass trials. This is the 40th session. 97 of the 205 suspects remain incarcerated, most of them members and administrators of the Peace and Democracy Party (The BDP). 7 suspects were not in attendance.BDP Parliamentarian Hasip Kaplan of Şırnak also watched the hearing.


The head judge Ali Alçık began by addressing Hüseyin Barış, the BDP’s ex-district chairman for istanbul who had finished his defense during the last hearing. He said, ‘You said that your telephone conversations had been twisted inside out in your statement to the court. Are you talking about a mistake in translation or are you saying they were misinterpreted?’ Suspect Hüseyin Barış stated that he used Kurdish in both his daily life and in his work with the party and that his conversations on the telephone in Kurdish had been mistranslated. Head judge Ali Alçın announced that Mr. Barış would submit a formal complaint to the court about the mistranslations and experts would investigate the matter. Kemal Seven was then summoned to the witness stand. ‘Language is a people’s honor, their literature, their everything--it  is their most valuable asset. Is charging me a fee for a translator in order to give my defense in my mother tongue in accordance with either  justice or the law?’


When Ali Alçın said ‘You will pay the translator’s fees,’ Seven answered, ‘Then I won’t give my defense.’ Judge Ali said, ‘Suit yourself.’

Lawyer for all suspects, Sinan Zincir, made clear that the other suspects did not want to make their defenses either if they were going to be required to pay the translator’s fees. He went on to say, ‘In this country, if a German or an Arab gives testimony they are not required to pay for their translations. But from a people who were equal founders of this country, you want money to give a defense in their mother tongue. This is hypocrisy on the part of the party in power.’ Zincir made clear that article CMK 212 (the law on which this decision was based) and related regulations were in violation of the Constitution. He requested that the matter be referred to the Constitution Court and put on hold. So that the incarcerated suspects not be victimized, Zincir petitioned that the translators be asked if they would perform their role on a volunteer basis.

An Discriminatory Application (of Law)


Lawyer Ercan Kanar stated that in no country, not even in Fascist states, were  a people charged money to speak in their own language. If neither Turkish citizens , citizens with a minority status, nor foreigners had to pay for translations, then the demand of payment from Kurdish citizens constituted a discriminatory application of law. Kanar said that while their previous request related to the unconstitutionality of item CMK 202 had not been accepted by the court, at the trial of the lawyers in the KCK case at Istanbul’s Severe Penalty Court 16, a verdict was still pending  on this matter. In that light, he requested that the application to the Constitutional Court be taken seriously. ‘The judges are not run-of-the-mill public servants. An independent and unbiased judge’s duty is to uphold theuniversal supremacy of law. With the legal understanding of an advocate of freedom, you can assure that the trial process is not impeded.’

Enough Kurdish to Express Yourself Sufficiently

Head Judge Ali Alçık, after stating that no unfair discrimination was being applied to the Kurds announced the courts decision made after recess. According to article CMK202 ‘A fee will not be collected from those, without regard to ethnic origin, who cannot express themselves sufficiently in Turkish, however for those who can express themselves sufficiently in Turkish but prefer to defend themselves in a language they may better express themselves in, a fee will be collected.’ Alçık went on to say on the subject of article CMK 202 being in violation of the Constitution, that the previous request for application to the Constitutional Court had already been rejected and it had been decided that there would be no returning to the issue.


Upon the lawyers request, Judge Ali Alçık asked the interpreters prepared for the hearing if they would be willing to translate on a volunteer basis. Interpreter Naşide Adanır and Sebahittin Havli said that they had taken on this position assuming that they would be paid however, so as not to victimize the imprisoned suspects, they would agree to do the translations free of charge.


An Eye Witness to the September 12th Coup

When Kemal Seven, 60 years old, was once more called to the stand to present his defense, he said that ‘September 12th was a dark period of Turkish history. Tens of thousands of intellectuals and patriots were put on the torture table and thrown in dungeons. I myself was arrested during that time and was active in The Turkish Teachers Union, TÖB Der* and later Eğitim*-Sen. After I retired I took part in the political work of the DEP*, the DTP*, and the BDP.


During the coup over 300 of my books were seized and destroyed. For 30 years this sistem has been terrified of books and here, now, in the 21st century they remain terrified. Ahmet Şık’s book ‘The Untouchables’ was banned, but the system could not stop tens of thousands of readers from downloading it on the internet. I was charged because of my work at the BDP Academy with the Kurdish language.’


Regarding what he had witnessed during the September 12th era, Kemal Seven explained that ‘Soldiers at the time, in order to have an easier time with bombing them, painted houses in Kurdish villages white. In the villages, every adult male was forced to strip naked in front of the women and crawl over rocks and thorns. Those who didn’t do so were beaten with clubs on which ‘Unbeliever Commando!’ had been written.’ (İmansız Komando)


TÖB Der—All Teachers Unity and Solidarity Society, one of the biggest teachers organizations ever with over 200,000 members, formed after the 1971 coup. Shut down after the 1980 coup with its members purged, exiled, and tortured. Many were veterans of the Village Institute system.


DEP, DTP—All Kurdish political parties shut down by the government