A Small Murder of Empathy-Diyarbakır Now


At the end of last November, I took a trip to Diyarbakir and documented it on this blog, day by day, in a series I called “The Diyarbakır Diaries.” The day we left was the day human rights lawyer Tahir Elçi was assassinated. And ever since then, the beautiful old city has been under siege by the Turkish military. And not just old Diyarbakir but cities all over the Southeast--Cizre, Silopi, Silvan. The situation is so obscene that I have been silenced. Silenced by horror, shame, and a sense of the atrocities being too big for me to write about. I don’t have the expertise to begin a proper blog entry about it. To truly grasp the situation there is so much to know--the AKP's relation with ISIS, the persecution of academics who signed a peace petition, the lynch campaign against a TV show for taking a caller that pled for an end to the violence, the history and tenor of Turkish nationalism.

When it comes to this war, I know what I read in Amnesty reports, in news reports and analyses and from first hand accounts from in-laws and friends in the area. It is enough to take the breath away, but not enough to really inform. But I have to write something. And so I will tell you the story of how I witnessed tonight someone completely murder empathy.

But I need to give you some context. Let's start with graffiti.In this article writer Umit Kıvanç addresses the graffiti sprayed by “security forces” all over the walls of cities in the Southeast. One of them says, “Armenian bastards,” referring to the Kurds of the town. 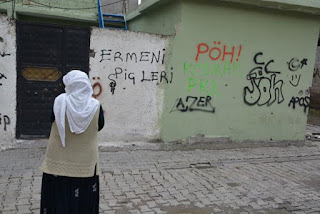 The word “Armenian” is more loaded than I can ever explain to someone who doesn’t live here. It is a symbol of a denied Holocaust—a massacre so great and so ugly that its scars still feel fresh in the Southeast, with a denial every bit as rabid and aggressive as the genocide itself. Nationalist Turks use “Armenian” as a swear word. It contains reminder and insult and threat. Otherwise, what is it doing here, smeared on the walls by security teams in a Kurdish town where the ancestors of the people addressed were probably taking part one way or the other in the genocide as perpetrators? AKP Adana governor, Hüseyin Sözlü, clears things up for you if you have doubts. He said, and I quote, from a speech early this month:“Armenians were used by imperialist powers and paid a heavy price. Now they want again to agitate our brothers against us as they did with the Armenians. Maybe our brothers will not fall for this, but it should be known that terror and its offshoots (referring to the PKK,the HDP and God knows who else) are using our brothers to try and pursue the same thing that the Armenians wanted to do in 1914 and 1915. Our citizens must not fall for this. If terror and its offshoots come to do this, then we as the government and as a people know how to handle it.”The call to genocide was made directly by people on the street interviewed on government run Akit TV. And dear readers, do not get confused by the format of a street interview. Nothing this "news" agency does is random. This is not an American paper but a mouthpiece for the government.
The boy interviewed calls for the genocide of the Kurds, that they be purged like a virus from the body.
Inflated rhetoric in Turkey is a sickness and the Kurdish movement uses the word genocide a little too freely for my taste—calling a purge a “political genocide” for example—but of course this is not coming from the Kurdish movement at all, but from the government.Which is reprehensible and horrific, but not surprising at all. I have read pretty much everything these is to read on the Armenian Genocide and its denial, and it seems to me that what is really happening is not so much a denial of the genocide itself but rather, amidst a lot of hemming and hawing and amateur sophistry, a lack of understanding that what happened was wrong in the first place, that this crime named “genocide” and the actions of the İttihad and Terakki government in 1915 are in fact one and the same thing, that exiling a population of people with the intention to exterminate them, no matter how justified you "feel", is a crime. And if you never think it is wrong, you don’t find any problem with repeating the procedure. And Turkey's history is filled with all sorts of mini versions of 1915; The Dersim massacres in 1938, the September 6-7 "Events" of the fifties, the razing of villages in the 1990s--all following a similar pattern of establishing political justification through deliberate provocation or outright lying (September 6-7 especially), whipping up public outrage and then slaughter.

Back to today.In September of 2015 we heard the horrific story of Cemile Cizir Çagırga, a ten year old girl shot in the street by security forces during one of the dozens of military curfews. Her mother had to keep Cemile’s dead body in a refrigerator because she would have been shot as her daughter had been if she’d ventured outside--think about that, you put your 10 year old daughter's corpse in a refrigerator and keep her there for days. Her father says she was shot 8 or 9 times from an armored vehicle.

And since then it seems not a day goes by when a similar story appears on Twitter or Facebook or in the independent online news sites (but not the self-censoring or directly censored newspapers). Twitter, for example, is full of hashtags calling for an ambulance. Early this week a boy shot in the street by snipers needed to be taken to the hospital but police would not allow ambulances to pick him up. A hashtag started #HüseyinPaksoyiçinambulans (ambulance for Hüseyin Paksoy) but the security forces never let one through. They argue that maybe they are transporting PKK in those ambulances and that's why they refuse passage. This absurd rationalization is another thing that reminds me of the genocide. If this were really the case then wouldn't they stop and search the ambulances? And couldn't they send their own people into the street to save these children that have been shot, if that's really what they wanted to do?

Security forces were finally ordered to by the European Court for Human Rights but it was too late. He had bled to death in the street. Tonight, as I write, another ambulance hashtag has begun for female university student Helin Öncül, currently dying in the street of Cizre. Everensel Newpaper reports that three women tried to carry her to the hospital after a decision made by the same European Human Rights Court to do just that, but they were raked by security gunfire and have not been heard from since. A group from the HDP (an opposition party) went to Cizre to rescue people injured in the streets but were fired upon as well.
I keep saying "Security Forces" because it's not clear, to me at least, just who is leading the attack. At times its soldiers in tanks. At times it's "special teams" made up of people of unknown background. Some suggest they are ISIS--an exaggeration, I'm sure--but they leave inflammatory Islamist graffiti on bombed out walls. Many in the military are speaking out against, if not the spirit of the attacks then the wisdom of them from a military angle. Many feel that the fanatical fight against the Kurds causes the state to dangerously ignore ISIS. So who are these special forces? Again, I am reminded of the "Special Teams" of 1915.
For a dizzying list of atrocities and abuses you can check the understated Amnesty report here. It documents over 162 civilian deaths, many of whom died by sniper fire in areas far from military clashes. The litany of crime is dizzying, and the bloodthirsty rhetoric of the government is alarming. The President used the word “liquidation” in a speech today and said negotiations with the PKK and the HDP were dead. Frederike Geerdink gives an excellent summary of the situation here.
What I hear a lot from my Kurdish inlaws and HDP friends is that people in the West of Turkey are indifferent and don’t care. They go on about their lives, eating in high priced restaurants, going to night clubs, while people are dying or exiled in the East. So this evening, on the service bus home, I was excited to here one of our teachers, a classic Western white Turk, fly into a rage about the situation in the East.“What is this stupid government doing!?” he shouted. “There are people dying in the East. Our soldiers are killing them! It has to stop. They need to take care of the situation out there. ‘Special Forces’! They are murder squads!”And then our driver, a Kurd from Bingöl, a man I have known for 6 years and with home I have swapped village stories, tells him that he is mistaken. The government is fighting a just war. The PKK are funnelling thousands of weapons into these towns. The people shot are allowing guns and missiles to be stored in their houses. The stories of security forces firing on people in the streets are all lies concocted by the Kurdish party. They want to divide the country. All typical AKP drivel, except he speaks AS a Kurd. And so the teacher who was so upset about the killings in the East isn’t sure anymore.“You have family out there, don’t you? You know I guess,” he says.And our driver continues. “I don’t have family in Diyarbakır, but yes, out East. And I know how sneaky these terrorists are.They fire on civilians and then blame our security forces. But what are soldiers to do? They terrorists are flocking over the border by the hundreds!”

"But how can you believe all that."

"I don't just believe it. I know. I've seen it myself. They will tell every kind of lie to get sympathy. They are terrorists. The HDP parliamentarians especially, all deceiving people like you. You can trust only one thing--that they will do anything to split the country."This is all fantasy. Human Rights Watch, Amnesty, The European Human Rights Courts, reporters on the ground from Vice, Reuters, Al Jazeera and everyone else have quite a different view of what’s going on.

But they don’t know, see? Our driver is from there. He says he's got the inside scoop. He’s seen it with his own eyes. And so he uses his KURDISHNESS to squash the budding empathy of this Western Turk.

And it breaks my heart.
Posted by Jeff Gibbs at 8:17 PM