This is going to be a quick visual run-through of our trip to Van--I think images are really the only way to explain this place after a point because the landscape was just so mindblowing.
The first place we stopped was the small city of Tatvan in Bitlis province. This is the home of one of Turkey's Mt. Nemruts--not the one with the famous heads of the Komagene kings, but the other one, you know, with the chain of volcanoes filled with crater lakes?
From Tatvan, you drive up the inevitable horrifying road, straight up past villages and goats into the mouth of the ancient volcano. Sometimes the sides of the dirt road are washed away. Sometimes the potholes are so big you have to descend into them and ease out, but once you make it to the top you are rewarded with stunning scenery. We took a detour down a cowpath that barely accomodated the width of our car--at times we actually had to jump small faultlines in the road where there was nothing for the tires to hold onto, but we ended up in a place like this. 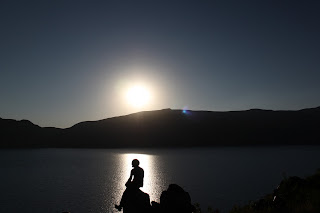 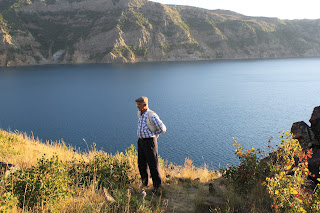 Now Dede was as transfixed as the rest of us and wandered around exploring rock and brush. We even sat down for an evening picnic, and he commented how stunning the scenery was.  'What is this place?' he said in wonder. But then we heard the yelps. Howls and squawks and yips echoed across the lake. Dede's head lifted suddenly. 'Jackals!' And he started gathering up our food and packing it away. 'Oh Dede, they're far away, no need to worry!' And suddenly, the lakes became the ugliest place in the world. 'Look,' he said, 'What's so special about this place anyway? You can see an old lake anywhere. I'm actually quite bored, so let's go ahead and get out of here! Hadi hadi!' 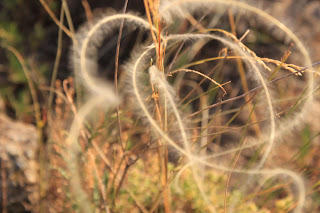 The plant life here was very curious. First there were these luminous coils of wheat colored grass. Then there were the spiky purple flowers that you find all over Kurdistan. Not exactly something you want to stick your nose into because it's a bit thorny, but nevertheless very pretty. 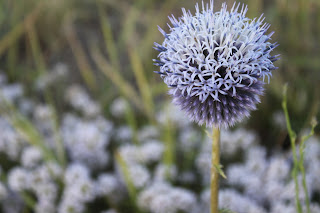 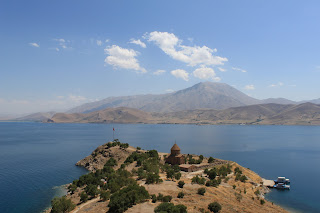 Then we traveled another two or three hours around the shores of the great lake to the city of Van. About thirty miles outside of the city itself is the port for the ferry to the church of Akdamar, an ancient Armenian cathedral with the ruins of a monastery around it. There is a legend about a Christian daughter of a priest and a Muslim shepherd boy falling in love. The girl's name was Tamar, and her father was not pleased with her choice of beaus. So he dragged her out to this island for safekeeping. She was a naughty girl though, and would signal her lover from shore with a lantern at which point he'd swim to her in the middle of the night and do the deed on the island's shore (washing his clothes in the process because the lake is so full of different salts and sodas, you don't need laundry detergent). Well, the father caught wind of this monkey business and locked her up one night, then took the lantern out on a boat and left it in the middle of the lake. The shepherd boy swam to it as always, but finding himself exhausted and in the middle of nothing, drowned. The last words on his lips were 'Ah! Tamar!' and that's how the island got its name. 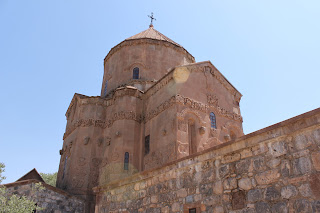 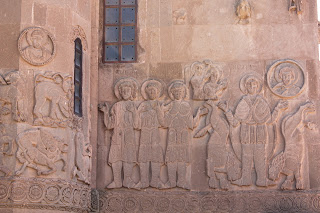 For years, Aktamar has been falling into ruin and only recently has the Turkish government allowed Christians to have services here and made any effort at keeping it up.  It's very existence is a little annoying to the establishment as it implies Armenians might once have lived here. They often play it off as being very ancient and all a very long time ago.  Right.

The carvings on the side are extraordinary--stories from the Bible and animals and intricate vines. 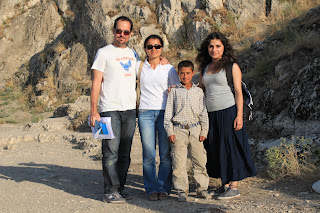 After Akdamar we head to Van and go straight to Van Castle, the stunning medieval fortress that sits over the city. It was occupied by the Russians during World War 1, but abandoned when the revolution started, leaving the Armenians to protect it alone. The Ottomans made short work of them and now the castle and everything around it is in utter ruin--here once stood centuries upon centuries of churches and mosques together.  We were guided around by one of the Kurdish boys who roam the ruins looking for tourists--this one was quite informative. 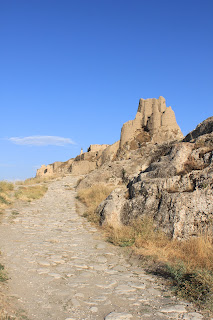 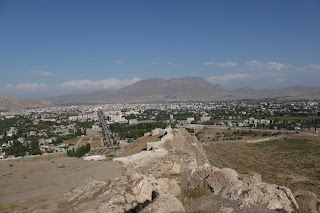 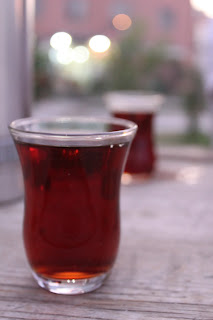 We ended with a Van breakfast at sunset in a square named for the Kurdish poet Ahmed Xani. It was good tea, carted all the way from Tatvan in our trusty thermos. Ramadan ensured the streets were utterly deserted--all the stores covered in metal gates and so we could not partake in the genuine Van breakfast. This was the day of the bombing in Hakkari and so on the way home we experienced the only encounter with a soldier the whole trip--he stopped us on the way out of the city, took a look at the foreigner, the old man, and the two girls, and waved us on with a smile and iyi geceler.