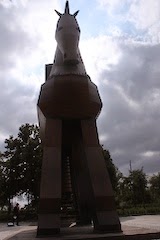 From Friday to Tuesday, we were off school for the Feast of the Sacrifice and so Delal and I rented a car and headed West, without plan or reservation, toward the Aegean Sea. Our suitcase was packed full of hopeful bikinis and swimming shorts—we needed the jackets and sweaters more as it turned out—but the trip was still fantastic. There’s a magic about the Aegean and as I reflect back on our trip now, it’s remarkable how it followed a path through one of the oldest stories in the world, Homer’s Iliad. And if this is dedicated to anyone, it’s dedicated to Mrs. Connie Shelnut and Mr. Allen Cleveland—two former English teachers in Lakeland, Florida who introduced me to ancient Greek literature back when I was one of the teens I am teaching now.

Our first stop was Çanakkale, the sight of one of the bloodiest battles of World War 1 between the Allies and the Ottomans—which the Turks won in no small thanks to Mustafa Kemal Atatürk. Our interest was not in battlefields, however, at least not modern ones, but the ferry, which, for 30 TL, takes you across the Dardanelles to Western Anatolia. About a half hour further south are the ruins of Troy (Truva in Turkish).

The site has not the grandeur of Turkey’s other ruins—Bergama or Ephesus—but there was something about running my hand along the fabled walls of Priam’s Troy, touching the stones—themselves half legend, half real, half god, half human—that sent shivers through me. These are rocks plundered by idiot 19th century tomb raiders posing as archaeologists, but they are also the walls before which Hector and Achilles fought to the death before an audience of gods.


From Troy we headed along a small one and a half lane road that wound around the Biga Peninsula—a lonely little outcropping of land filled with tiny villages and barren rocky hills rolling down toward the sea. In ancient times, it was called Troas. You drive along winding about boulders and olive grows and suddenly sight a row of Greek columns towering above the brush. There are dozens of little archaeological sites—my favorite of which is the great temple of Apollo Smitheon, the Temple of the Mice in the village of Gülpinar, once the city of Chryse.

This temple plays a pivotal role in the story of the Iliad. In the very first chapter, the Greek king Agamemnon kidnaps the daughter of the priest of this temple to be his “war prize.” The girl’s father comes to the Greek army bearing ransom, but the king still will not give her back, and so the priest prays to Apollo to send a plague upon the Greeks which ravages them so badly they think of giving up the whole war and returning home. When Achilles finds out, he is enraged. He demands that Agamemnon return the girl as should have been done in the beginning.

“Hear me,..., O god of the silver bow, that protects Chryse (Gülpinar) rules Tenedos with your power, hear me oh Lord of the Mice. If I have ever decked your temple with garlands, or burned your thigh-bones in fat of bulls or goats, grant my prayer, and let your arrows of plague avenge these my tears upon the Greeks!”

Walking along the temple ruins I try to picture the priest’s curse—offered up at night, perhaps, on the waning moon of Apollo’s twin sister. The spell, the rodents swarming out of the altar in answer, the dying Greek mercenaries on the shore of the Aegean just visible over the pomegranate grove. But the legend that really intrigues is this bit about the mice. Why a god of mice? The ancient Greeks called mice the ‘sons of the earth’ and believed they formed out of vapours deep underground. They were magic, connected to both healing and pestilence and seemed linked to the many springs that still bubble out of the ground in Gülpinar. 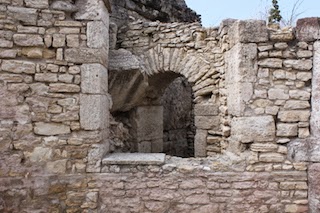 In his prayer, the priest mentioned Tenedos—the island ruled by Apollo now called Bozcaada. We took a ferry across (60TL round trip) and found a picturesque little town of 19th century Greek houses and churches. Most of the Greeks of the Aegean “migrated” during the forced population exchange—but not the people of Bozcaada who stayed until the 60s and 70s when the Cypress conflict and political persecution prompted them to finally move. Perhaps the historical proximity of their exodus explains why the old stone houses are so beautifully preserved.

A few Greeks remain and their culture still has a powerful influence. The wine here is legendary, and the island has some of the oldest wine making traditions in the world. We went to a tasting at a cafe run by Yunatçı Vineyards--one of the only Muslim families to make wine who own one of the oldest vineyards in Turkey. Many of their wines are made from a local grape called the Kuntra which resembles Pinot Noir. Thanks to the Puritanical AK Party I cannot offer you a link to their site because that is now considered advertising alcohol, which is illegal as is offering wine tastings at the winery itself and so the Yunatçıs have smartly opened a small cafe to provide that service. For a measly 10 lira (5 dollars) you can sample 10 of their finest wines. It’s ridiculously cheap. Besides the wine, the island is full of seafood restaurants serving up the renowned Aegean mezes. The hostess of our pension told us that jams and preserves were a specialty of the island as well and we sampled her sun-dried tomato preserves with almonds for breakfast. Yum!

There’s something poetic about Bozcaada—I could have stayed here for weeks and wandered the streets. Stone houses and bougainvillea, churches and old Genoese castles, vineyard and old fisherman. Our pension had a terrace that overlooked the old castle on the sea and we had a wonderful breakfast there watching the starlings and gulls circle over the battlements as the sea crashed on the rocks below. The people we meet are warm and friendly--everyone one we pass says hello and asks after us. Where are you walking? You're not leaving so soon, are you?

This is the island that spelled the doom of Troy. It was here that the Greek ships hid to trick the Trojans into thinking they had all gone home, even as the fabled wooden horse was wheeled into the city gates and ravaged the city. From the shores you can see the fabled Mount Ida--where Zeus stood and watched the war.

(I hesitated to publish a travel blog this week in light of what is happening in Kobani where a siege by the blood thirsty ISIS will most likely result in the massacre of thousands of Kurds mostly to the indifference of Turkey--and, apparently, the US military as well. But I have anyway--however ill timed that decision is, I want to say that our hearts and thoughts are with the modern war just over the border.)
Posted by Jeff Gibbs at 9:01 PM