SWEET MAGNOLIA AND BLESS YOUR HEART--ENDANGERED FOOD FOUND IN THE SOUTH!

Whales and languages are not the only things in danger of dying out. Whole cuisines are as well, and as food is an integral part of any culture, the loss will not be a trivial one but take with it memory and emotion and a host of subtle nuanced things I find difficult to describe.

The first time I took my wife to America, I desperately wanted to share with her some authentic Southern food in authentic Southern restaurant. But outside of my sister’s house, it proved impossible to find (and unless I threaten her, even she’s liable to take shortcuts on the creamed corn, for example, and buy a package.) Now you could find all the Applebee’s, Chick Filets, Golden Corals and Taco Bells that you wanted—and the depressing fact is those are becoming the new Southern food if you measure a cuisine by what its people consume. And so when we discovered three places this summer that served as refuges for endangered cuisine, we were happier than a fox in a coop full of chickens. So to speak. I’ll tell you how to find them and what you’re in for.
A hot Birmingham afternoon—we are downtown and have just wandered out of the Civil Rights Institute and taken a stroll through the park where we chatted with some of the homeless people relaxing there. There was one old man, a very dark, older black man with a do-rag who asked Delal if there were black people in Turkey. He also gave her some very useful advice about what angle to take a picture of one of the sculptures—a water cannon fired upon two children. This, of course, a scene we are rather accustomed to here in Turkey. The brutal echo of it in our own civil rights movement was rather sobering.

Two blocks down from the Civil Rights Institute on 4th and 16th Streets is a modest little corner restaurant called Mrs. B’s On Fourth—which served up maybe the best southern food I have ever had out on the town, period. D and I had both eaten just an hour before, so we weren’t hungry but we you couldn’t even read the menu on the window without working up an appetite. And I mean serious Southern appetites.  Sweet potato pie?
The restaurant is laid out cafeteria style with trays of whatever the cook has whipped up that day. We ordered a plate of barbecued chicken to split—with two sides, oven baked mac’n cheese and broccoli and carrots. The broccoli and carrots combo was just a last minute whim, and I was doubtful, but it turned out to be out of this world delicious. When Delal took her first bite, her eyes went wide and she gave me the traditional Southern reaction to food that I’d trained her to do. “Mmm-mmm-mmmm! So good you want to slap your mama!” When she hit the chicken, she went on some kind of ecstatic high. And let’s not forget the cornbread—not too sweet like people make it nowadays but just the right dryness for dipping into the chicken drippings.

The staff is also incredibly friendly—laughing and joking with us and providing endless bucket-sized glasses of sweet tea. We topped off our meal with a bowl of fresh banana pudding. Banana pudding is extinct in my house, but it has a special nostalgiac meaning for me—it was one of the things my mother cooked and cooked well.  She used to use boxed pudding and it shook the world, but this pudding was homemade and was sure to give a shake to God’s kingdom itself. (Mom, I want banana pudding the next time I come home!)

Soul food—a perfect word for this. It not only nourishes the spirit, it builds the spirit as surely as it builds the muscle and bones—with every bite memories of my mother and father and Granny and grandma and a day out at the picnic pavilion on the rodeo grounds and church suppers out on the lawn in the summer and taking out food on a paper plate to eat with my cousins down on the lake.
Our second stop is Ken’s Barbecue outside of the Birmingham city limit near Pinson. It has the best breakfast in the world with a crucial endangered species--full on Southern biscuits and sausage gravy. Not frozen or from a box or made with anything but the old recipe ingredients. These are real live buttery biscuits--with your traditional fair of eggs, bacon and grits on the side.

My final eatery is the Outback Crab Shack—miles and miles out in the swamps to the West of St. Augustine, Florida. As a real life Floridian, I often listen to people malign my homestate. It’s not the South. It has no culture of its own. This sort of thing. Well the Outback Crab Shack is a real Florida seafood shack, the kind that have almost vanished from the swamps. They’ve got boiled shrimp, fried gator tail, crawdads and fresh hushpuppies (a Florida invention by the way). And best of all they have blue crabs.


Florida Blue Crab is another nostalgiac piece of my past. I have fond memories of going up to the Chassahowitzka River near Brooksville, Florida with my boyhood friend whose dad and stepmom had a little plot of land and trailer on the river shore. We’d go fishing for crabs in that crystal blue spring water as mullet swam in schools under the boat. We’d bait the hook with chicken guts and then throw the crabs that latched onto them in a bucket, later to be boiled back at camp in a kettle full of beer. We ate them with butter and lemon, and there’d be campfires and ghost stories and         sneaking off into the woods to play Hide and Seek.

We started off with conch fritters—which were not the best I’ve had but are hard enough to find that I was appreciative anyway. Then I talked Delal into getting the crabs here. Florida blues are not the most aesthetically pleasing meal in the world. The waitress demonstrated how to get at the meat. “First you break the face off.” And out spurts a spray of crab juice. But this is part of me—this is the swamp and skinny dipping out under the moonlight and the sounds of the mullet jumping at night and sunburns and the feel of the woods, the excitement of the treehouses and tarzan swings on the muscadine vines, and even the vegetal smell of the hot swamp mud.


The atmosphere was impeccable. What locals are always calling and longing for as ‘the real Florida’. The restaurant has a white shell parking lot filled with pick up trucks and church vans. It sits on a tributary running off the Great St. Johns called Six Mile Creek and after dinner you can walk past the long boardwalk that lines the water. (There’s even a parking lot for boats—two spaces set aside for local churches) 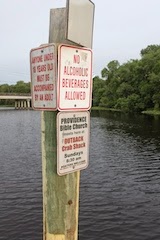 When we were there, a thunderstorm had just passed—the thunderheads towered behind the cypresses in the sky to the East, catching the pink and orange of the setting sun. The water reflected the sky perfectly, with shimmering waves of dark water and pink light reflections. The sounds—home. Alligator croaks and night crickets and frogs and bass jumping. The smells also home---the tannic river, the humidity, fried fish. (Though next time I want boiled shrimp—don’t get me wrong, the blue crab was great, but I think once for old time’s sake, is enough—unless I’m getting them from the river myself. And I miss those shrimp, too.) 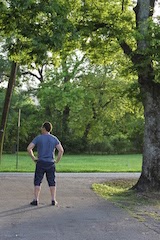