On Saturday, we went to Beyoğlu and Karaköy for Bienal exhibits. As I explained in my last entry, most of the installations are inside the city, not in a museum or a special venue but in the old mansions and köşks and historical buildings that normally are all boarded up or somehow else impossible to enter. A living part of Istanbul that makes the city and her past as much on display as the art. Each piece and place reflects and echoes some of the fear and darkness of the past, and of the present. 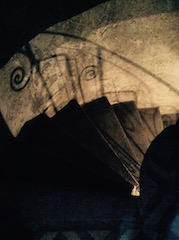 In Beyoğlu, we found an exhibit in a Greek mansion built in 1915. The artist has carved into what looks like slices of trees Armenian symbols and placed them in the ceiling. You lie on yoga mats on the floor and look up at them. The symbols are especially known by local "treasure" plunderers, for when the Armenians were driven out of their villages, they often hid their belongings somewhere in the landscape--or so it was believed--and marked or mapped out the location with these symbols carved into rocks. There are snakes and hawks and scorpions and ghostly figures marching in a line. The house itself is abandoned and dilapidated. You can wander all the floors. The walls themselves are works of art--layers and layers of colors painted one over the other and chipped and rotted and decayed. 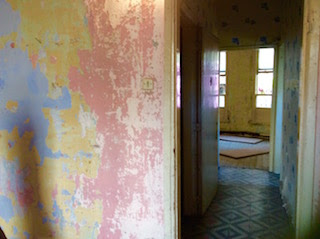 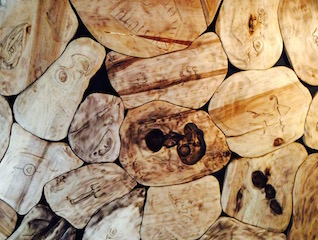 Down the road from the Greek mansion, is an empty parking garage scheduled for demolition by the demolition-obsessed city government. Not that it's an architectural wonder or anything--just a vast empty gray space in which an exhibition consisting exclusively of sound has been installed. Clicks and drips and heartbeats and echoes of car noises fill the empty space. A blue collar place about to be gentrified into a upscale mall or hotel. 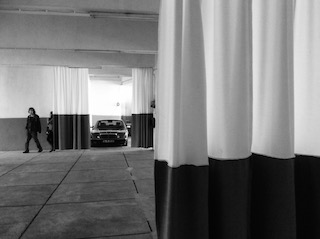 Down on Bank Street, a few Bienal exhibits are houses in the Salt Gallery, set in the gorgeous 19th century Neo Classic Ottoman Bank designed by Aléxandre Vallaury. 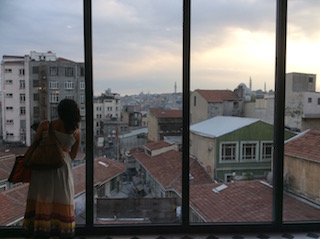 In the basement is an installation called "How Did We Get Here" about the censorship of books and life following the 1980 coup. It echoes what we are going through now--as journalists are attacked on the street, ordinary people are arrested for insulting Erdoğan during discussions in city parks, and a new campaign of coup-era nationalism has been revived resulting in war in the East and mob attacks on Kurds in the West. Among the titles censored by Turkey's military on "moral" grounds are Einstein's Theory of Relativity and the Plague by Albert Camus. The hatred of knowledge and science and intelligence and enlightenment is absolute. 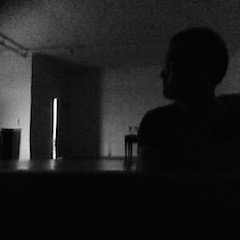 In one section, artist Hale Tanger has reconstructed an apartment from the 1980s--complete with radio blasting military news and children's notebook filled with nationalist slogans and praises to Atatürk. All the rooms are Spartan, black and white, military clean--except for one. A small door leads to a closet full of hidden things--costumes, jeweled mirrors, colorful yarns. Soul and imagination and play stay cowered in the back.
In the Istanbul Modern, we see a young man with his shirt unbuttoned halfway down to his belly angrily approaching the young student workers one by one. "How dare you put something in this place that the State does not approve of!" he rants at one girl near the entrance. He spends at least an hour stomping from sign to sign, looking for the word "Armenian"--and every time he finds it, he harangues the nearest Bienal worker. It's almost a performance in itself. Will he come back with a mob and attack someone, burn something, kill someone even to deny there are killers in Turkey's past? Was he sent here by some government agency or just lone freak?

He hates this: A scroll painted with the crimson derived from an Anatolian insect. The secret of extracting the dye is known only now in Armenia. Drawings with the dye gradually give way to a more modern, industrial red--the red of the Turkish flag that blocks out the organic color of the past.

He hates this: a painting by an Australian, Vernon Ah Kee, who saw in the "violence in Turkey's East" a parallel with his government's oppression and massacres of the Aborigines, particularly the Palm Island riots of 2004. 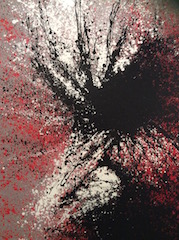 This installation by Sonia Balassanian--an Iranian Armenian--particularly enraged the young man. It is tuff stone from quarries just over the Turkish border in Armenia, across from the ruins of Ani. Each one resembles a head and seems to recall the deportation and murder of Istanbul's Armenians in 1915 as well as the beheadings in the Middle East today. The man tells the young girl manning this installation, "You people have turned this place into a house to worship the Armenians and insult the motherland!" 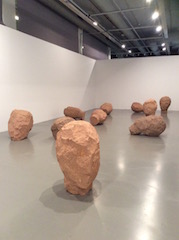 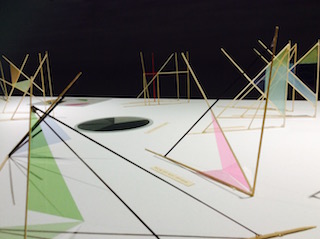 Another exhibit takes the abstract economics data--graphs, charts, projections, and uses everyday materials to turn them into three dimensional forms. A rainbow colored pattern of sticks are the annual work fatalities in the coal industry, a three dimensional web of colored wire is a graph of industrial pollution over time. They are beautiful, and as Delal says, when I look at them, I get a strange feeling at the front of my forehead, like a part of my brain is developing that wasn't there before: the abstract ideas turned into math, turned into pictures, turned into toys. 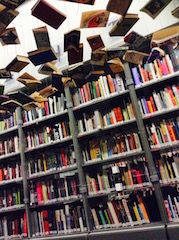 One last exhibit is in the museum library, a thought experiment by Lebanese artist, Marwan Rechmaoui. It represents the kind of "partial censorship" prevalent in the world today, where the choices look like they are there, but nevertheless are not--a perfect metaphor for Turkey, where we are constantly being told by the government how free everything is and yet drowned in censorship. the library book shelves are covered with a clear plastic wall. In each section there is one slot where one book can (with difficulty) be pulled out and read. You can see all the others, but not touch them.

In the Italian high school is a film by a director from Inner Mongolia and a video by a German-Turk making a journey across Bulgaria to explore how the Ottoman past is remembered. From the top floor, glancing out the window toward the courtyard, you can see the vast ruins of the dilapidated French orphanage, now hidden behind other buildings in Beyoğlu. It's symbolic in itself--showing how behind the city's facades are gigantic relics of a past erased or purged. 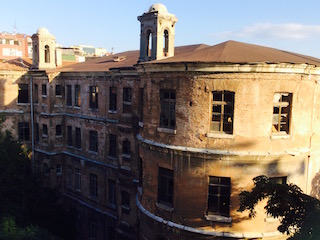