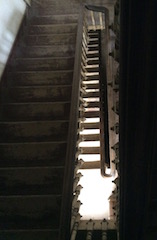 I had a dream when I was a freshman in college, the culmination of a lifetime of recurring dreams of haunted houses. I wandered lost inside a wood mansion, full of stairways and panels in the wall, and rooms within rooms. I could feel there was something else in there with me, something unseen. Up and down stairs, empty rooms full just a second before I entered. I opened a panel in the wall of the living room and climbed down a narrow step into a basement room with a fireplace. Removing the bricks of the fireplace revealed another room. I knelt down and peered in—the feet of a chair, a dark red carpet. It was also fire-lit and I knew that whatever presence I had felt waited there. I crawled through and woke up.

I like art that raises a question in your mind that your rational side can’t answer—only an image, only an experience can provide some kind of release. The Istanbul Bienal has several exhibits this year among the crumbling mansions and köşks of Büyük Ada. The exhibitions and venues work together to weave a spell. When the exhibition disappoints, the house takes over. 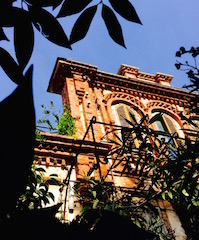 A break in the old crumbling stone wall. You wander left and down toward the sea through thick wood—oleander and acacia and fig and palm. There’s a break in the tree and the red ruins of a köşk—red brick, red rust, the ruin of red blankets ripped up in the debris.

It was once the Yanaros Mansion—a richly extravagant köşk overlooking the sea. İzzet Paşa, who conceived of the Armenian massacres under Abdul Hamid II was it’s original owner. Had he stood in one of those ruined windows and looked out toward the Asian shore dreaming of the killings to come, of the blood? 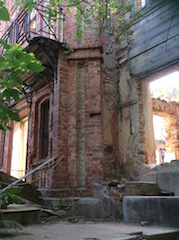 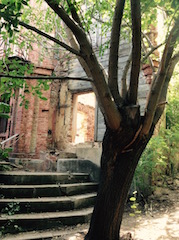 The house passed to Trotsky, who wrote his history of the Russian revolution here, "It has been four and one-half years. I have the strange feeling of having my feet firmly planted on Büyükada." At sunrise, he would from the peer where the strange sculptures now stand in the water. White animals with mirror images of one another built in sea trash, rotting on their backs. The dead, the ghosts, the land of monsters, of demons and invisible presences breaking into the world of the living. 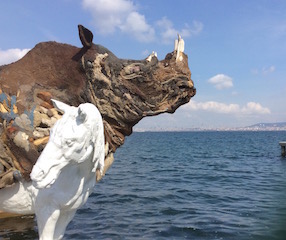 The tall ginger-bread towers of the Rizzo Palace jut up over the trees—of all the houses this is the one that most resembled the ones in my dreams. On the wooden porch is the small of long years of neglect and rickety old furniture. I catch the reflection of a woman in a dusty window overlooking a fly strewn table. 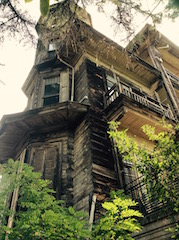 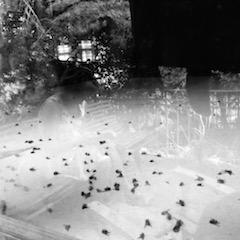 Sound feels the house. Speakers on each floor that makes the walls seem alive. There’s a dark basement, a narrow stair. You can peek into the ruins of a kitchen, a bathroom, a study, a broken window. A white curtain still flutters over a white dust window. There are roof tiles on the floor made in Marseilles, France. On the top two floors is a video. When I first look, a digital naked dead man is wandering a field of white, muttering “I’m sorry, I didn’t know.” When I last look, he is on a bed in a house that suddenly collapses beneath him into a black void. 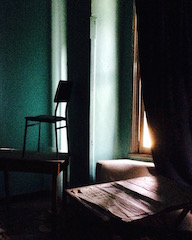 I followed one woman as she peered behind a blackout curtain into the ruins of a bedroom—high ceiling, blue curtains, broken furniture and dust and a giant mirror with a French inscription, delicately carved woodedn frames.
“Muazzam!” she whispered. And something else waiting in that room heard her, something that no one had recognized in a century. 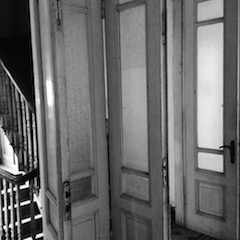 The Cihannuma—the World Viewer—a red tower with a 360 degree window that sticks up into the blue sky from the Mizzi mansion. Mizzi was a Maltese businessmen. His son, Giovanni, brought a telescope up into this tower and spied on all the islands and city and sea. 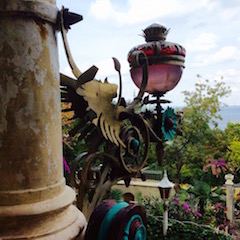 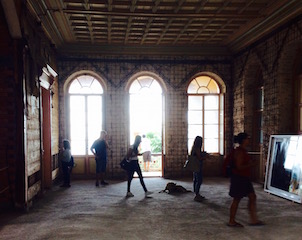 Inside is a “sound” exhibition. Susan Phillpsz has taken photos of a shipwreck and placed recordings of undersea noises all throughout the empty rooms of the stone palace. You stick your head through a crack in the wall and there’s the metal parts of an old Nazi ship and the sounds of something metal on metal banging relentlessly against each other under water. The light pours in muted through the stain glass windows. One of the stray dogs had wandered in. 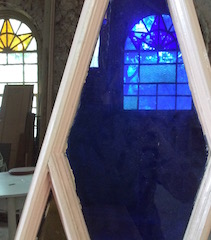 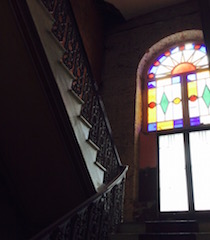 The art of ruin, of things crumbling away into time but fat with ghosts, hidden spirits and monsters and demons folded in quantum pockets among the rubble. A draft of air caught coming through the autumn wood, a cold memory, the rust, the remnants of the face painted in the wall, rain-washed and snow washed over hundreds of orbits around the sun and flaking off into the dirt.

On the quay, we end our day with food. The Arab tourists are everywhere. The station for the horse and carriages is behind us somewhere. You can hear the clop of horse feet. the place is a hole in the wall, but crowded with locals. They serve piyaz and köfte only--it's amazing. The crowds, the food, the sunlight--we are out of the spell of the old mansions. 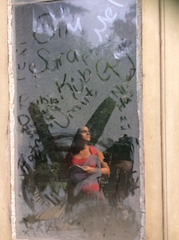 These are beautiful pictures! But I wish you would upload them so they could be seen bigger.

I would, but people have used pictures from the blog before for publications without my permission so I am protecting myself. Just ask personally, dude...