We awoke early this morning--around nine or so, to full on summer level sunlight. It poured in from all directions and was warm enough for me to walk around in a T-shirt. All three of us, still in pijamas, immediately dove into the news. Last night, after I finished this blog, just a few kilometers away, someone had apparently attempted to assassinate Selahattin Demirtaş, the co-chairman of the opposition HDP party. A bullet hole was found in the rear window of his car. If they had succeeded, the whole country could have been plunged into a civil war. The governor of Diyarbekir province (an AKP appointee) denied that it was a bullet hole, of course.

After news and politics, we had our breakfast on the balcony overlooking the park. As we ate, two F16s passed overhead--on their way to God-knows-where from the Diyarbakir military airport, to bomb Kurds in Iraq (most likely) or perhaps somebody else in Syria. Hilal made a kind of herbed French toast, and as we ate, I watched the goings on in the park below. One jogger, a kid spinning an trashcan and startling a cat, two old men chatting on a bench, a pair of speed walking girls, a group of student boys in uniform walking and chatting, one of them in front of the others, walking backward to face his friends and gesturing excitedly. 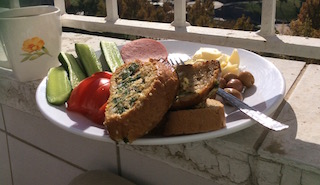 Delal and I decided to stroll around the new city, not the touristy part, just to see what we ran into in terms of ordinary life. We took a road behind the apartment complex and passed onto a wide sidewalk lined with Acacia trees. The fall weather was pitch-perfect--sunny, slightly cool, crisp air. Pairs of students strolled to school arm in arm. 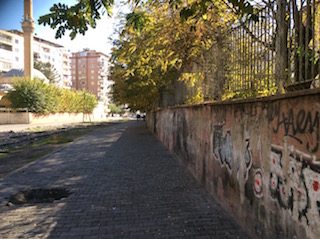 We passed by a high school in the neighborhood of Bağlar. Back in 2012, at a protest during the height of the Kurdish hunger strikes, I had met a boy from here who told me that this was the poorest neighborhood in the city. He said that the police loved to target Bağlar and once, during a protest when he was twelve, he'd watched them chase down and kill one of his friends. I wondered if this was the school? The graffiti on the walls around here, I think, explains a lot about the place somehow. The usual names of lovers separated by hearts, lists of school friends names, and political slogans praising Rojava, the HPG, the PKK, and Demirtaş (nicknamed Selo). On one wall a name has been painted over and the rest of the sentence, "is a novel that has not yet reached its end," now lies subjectless and seems to apply to everyone here. Just down the road is an advertisement for Salsa classes with the slogan "And our souls remained free..." 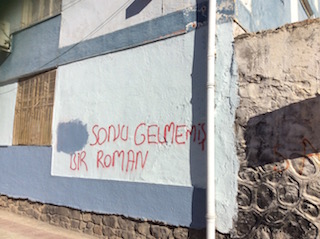 We stopped in the chic neighborhood known as Ofis (Office) for a cup of menengiç coffee. Menengiç is something you find all over Eastern Turkey. It is a creamy kind of coffee made from the roasted terebinth berry, a bitter relative of the pistachio. The cafe was called "Ares", the god of war. Out front along a stone wall, someone had lined up three nargile pipes--red, green, and yellow. When I took a picture, the waiter told me to hold up.

He rearranged the pipes so that they went in the proper Kurdish order according to the slogan, kesk sor û zer (green, red and yellow)--the colors of the Kurdish flag. When he'd finished, he put his hand on his hips and smiled. "Now you can take a picture."

A few months ago, I got in an argument on Twitter with a well known journalist who had written an article where she'd insisted that Diyarbekir had become like a foreign country--with everything having become so Kurdish and so other that when you ran across a Turkish restaurant you found yourself as surprised as when you saw a kebab shop in Paris. Given the Turks paranoia about the Kurds always trying to divide their country, I thought this was an exaggerated and irresponsible thing to write, knowing how it could easily provoke and mislead a people already quite confused and deluded about what was really going on here. She countered by asking if I had reported on this place for over ten years, if I had been there in the 90s, if I was as experienced and as big an expert as her. Well, as I said then, no, but with a few pictures from our wanderings on the street, I think you can see there isn't much all that foreign for a Turkish street (sadly). One need not be an expert to look around and see what's right in front of your face--the same Ceylan Kuafors, Mehmet Avukats and Tarihi Cafes as in Istanbul.


But there is definitely a different vibe in Diyarbakır--something more relaxed, friendlier than Istanbul or any city in the west of Turkey. Paying always seems to an option--if you have the money, and the sums are negotionable. 25 lira--oh you only have two twenties? Give me one then. Behind the wall of buildings on Bank Street was a maze of tea gardens in the shade of acacia trees. We bought different kinds of pistachio filled baklava from a street vendor and took them to a little table under a tree in the back. No one was bothered that we'd brought in food from the outside. We ordered teas and watched a couple of cats bathe themselves under a grafitti or what apparently looked like a vomiting fish. 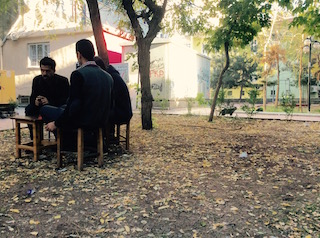 Just down the street was the Monday Bazaar--full of all the usual suspects of the Istanbul bazaar with a few surprises. A pumpkin yellow on the inside, purple carrots, pink pomengranates and deep red persimmons. 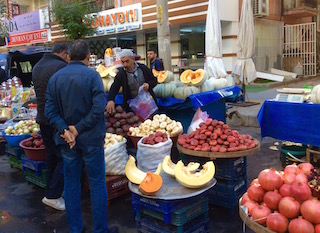 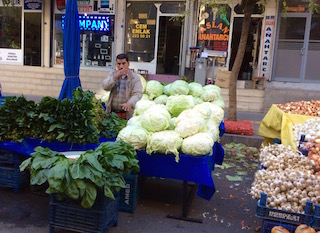 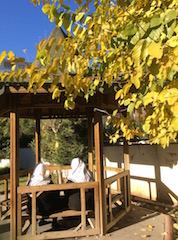 We passed through a park--the sycamore trees bright yellow, the leaves raining down, fluttering and fluttering. A couple of old ladies chatted on a bench near a sign advertising food in Kurdish. We run into these signs from time to time--they fill the park across the street from our apartment, but we hadn't seen many in Ofis until this moment.

Hilal had been working in the old city, called Sur İçi (Inside the Walls), named because it is located in the medieval black basalt walls that surround the historic quarters. It is here that young people--male and female--have blocked off streets with sandbags and trenches and declared their streets independent of the Turkish state. It is here that clashes between the police, the army, and these youth have resulted in the deaths of citizens and soldiers. And yet, walking past the famous Hasan Paşa Han or the shoe shine market you would never know anything was afoot.

We met Hilal at an old Caravansaray called "Sülüklü Han"--the Leech Caravansaray. According to the sign, there used to be a well from which doctors would extract leeches to bleed their patients. A plaque on the gate explains the history in all the languages of the people of Diyarbekir--Assyrian, Armenian, Kurmanci, Zazaki, Arabic, and Armenian. This is anathema anywhere else in Turkey where the mentality is ONE LANGUAGE, ONE PEOPLE, ONE RELIGION. Anything else menas the country will be divided by whatever mysterious powers you blame for everything.

Sülüklü Han is located in the middle of the blacksmiths market--sparks fly across the gate next door from where a smithy is forging spiked dog collars. Hilal has brought a long a friend who explains an interview he had with the women's football team who believed that their rivals from Iğdir at a recent match might actually have been men, or at least on hormones. They were too aggressive, the women had insisted, too violent.


We ended our night on the city with a dinner of shish kebabed liver--for which the city is famous. Absolutely delicious!