My mother-in-law and her sister arrived last night--making us a party of five.

From about 10 PM on, the roar F16s filled the air and almost managed to drown out the voices of my in-laws who stayed up late debating various topics, ranging from the character of the various brothers-in-laws in the family to what in human nature pushes large groups toward extremism. I woke up to only the sound of F16s, which have been flying back and forth non stop all day. More insane news greeted us this morning—the Turks shot down a Russian plane.

This entry is going to be mostly pictures and will be devoted to two things--the food and the architecture of the old city.

People in Turkey always wax romantic about the cuisine of Antep. I never found anything there but the usual Turkish fair and none of it all that special. To me, Diyarbakir is the premier city for food in the east. I have never eaten anything bad here, never.

Here is a brief glance into our culinary adventures today.

We started with a breakfast at Hasan Paşa Han--a 16th century caravansaray in the middle of the old city. Breakfast came with 24 different plates of food. I counted 8 types of cheese, a dish of cured lamb and eggs, a spiced eggplant and tomato salsa, cream and honey, yogurt with strawberry sauce, fresh butter, potatoes, roasted peppers, a roasted flour concoction good for eating with bread, a kind of peppery paste (also for bread), orange preserves, honey on the comb, bananas with pomengranate sauce, cucumbers and tomatoes, an arugula salad and more. Breakfast here is a Diyarbekir ritual for us and a must for anyone visiting the city.

Around the han are all sorts of markets. Dried fruits and vegetables are everywhere (the climate here makes it ideal). I recommend cooking with sun-dried okra. Amazing. There is also a spice market which sells different degrees of roasted Urfa peppers and a staggering variety of pepper and tomato pastes.

I ran into a strange man while perusing some of the unusual soaps sold here. He came down the sidewalk wearing a beret and sunglasses. He had bright white hair and a brown, creased face, and walked with a cane. Under one arm pit, he had a stuffed fox whose body seemed abnormally long--nearly two thirds of the man's height. Under the other pit, he carried a stuffed weasel, equally long. Each animal's mouth was open, showing its fangs. I would have snapped a picture but something told me that words were a better description of this--your imagination at this point has a better impact than whatever photo I could have come up with. 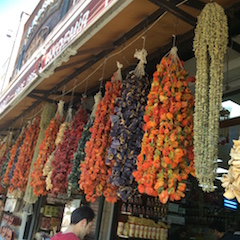 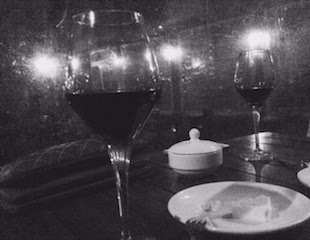 It gets dark rather early here these days--around 4:30, and as the sun was setting we went back to Sülüklü Han from yesterday for some coffee and then, a cup of their house wine, a red that was amazing. Being dark, I could only get a decent picture in black and white. The proprietor went on and on about how organic it was. In any case, it was light, somewhat fruity yet with a nice body.

Dinner was at one of my favorite restaurants in Diyarbekir--Tabier, a lahmacun restaurant that has the best "Arab pizza" I have ever tasted. The crust is thin and crispy on the outside, soft on the inside and the meat topping full of spices, with a nice dose of the Urfa pepper. It comes with a table load of mezes and vegetables, all on the house. This is a typical feature of eating out in Diyarbekir--no matter what you order it comes with a table full of side dishes, which is why I feel absolutely stuffed wherever I go. 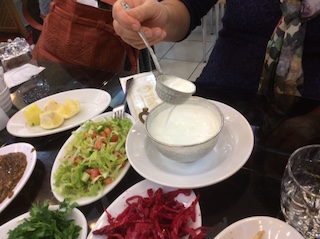 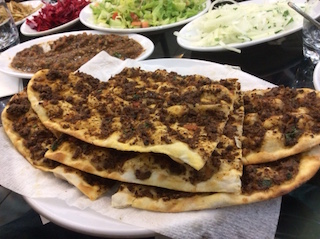 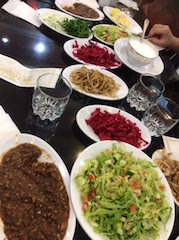 I could wander around the inner city for days--a maze of tall black basalt walls, ancient churches (of Armenians, Chaldeans, and Assyrians) and crumbling houses. The height of the walls in the streets are a defense against the intense heat of the summers. With the air so dry, anywhere you find shade is cool, and these tall walls provide long winding avenues of cool shadow. 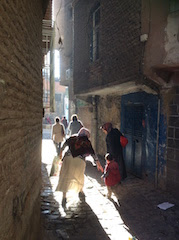 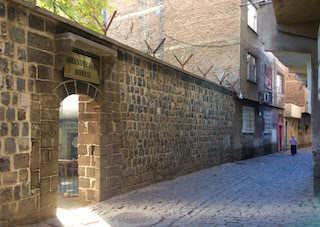 Before I go any further, I would like to say that as we toured the old city today, we passed through one of the areas that have been barricaded and declared independent of the state. (It was near one of the historic Armenian churches). Paving stones have been used to build walls, trenches dug, and sandbags piled up as barriers. White plastic tarps cover the streets as protection against snipers. It's perfectly safe during the day and people carry on about their business as usual. I saw some of the youth responsible for the blockades--a few masked but most not. They were mostly boys in their early teens though there were lots of smaller kids, too, as young as five or so. They had built a fire in a ratty trash barrel and set up couches and arm chairs around it in the street. There were also girls here and there--they seemed to command a post of their own down a different street. An older man played a bağlama from one of the sofa. A group of middle aged to elderly women in head scarves sang Kurdish songs and stood around the fire with the boys. A blond woman in a pants suit leaned against the all and though she did not sing, watched the whole performance thoughtfully. A couple of toddlers came out of an apartment building to watch, fingers in their mouths. In other words, ordinary people from all sections of Diyarbakir's poor defending this dilapidated street. How many of these people singing would survive the week, I wondered? Who would be shot? The little boy eating cookies? The old covered lady sitting on the oil can and warming her fingers? The teen girl with the bright colored scarf covering her face? Who would become the next "martyr" and who would go about their lives? 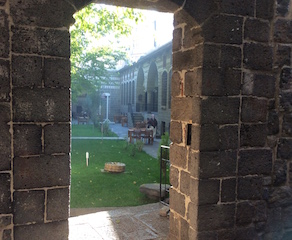 Through the maze of black walls you stumble occasionally on a sudden burst of green, an opening into the garden of one of the old hans. We went to Iskender Pasha Han for menengiç coffee. The courtyard was gorgeous, full of golden leaved mulberry and sycamore trees. Magic. 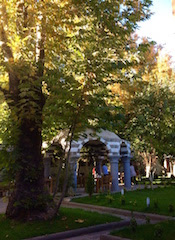 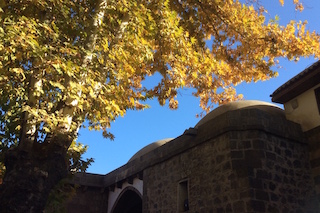 Many of the houses of the old aristocracy have been turned into museums. Here is the courtyard of the poet Ahmet Arif. Diyarbakir social life was once completely centered around these courtyards.
The poem on the wall is from his famous anthology, "The Manacles Were Worn Away by Longing" 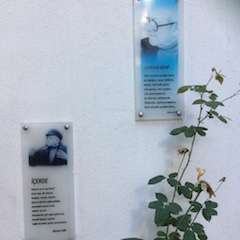 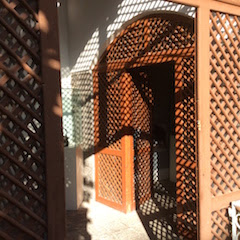 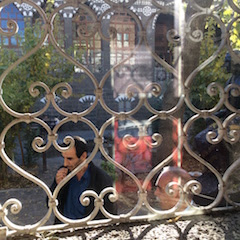 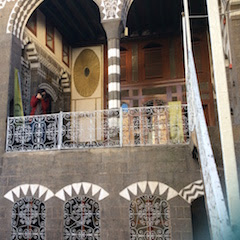 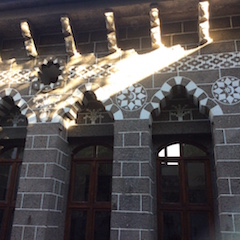