The lights.  There are no street lights in my neighborhood, and the dark is big.  Chunks of shadowed street between the black shapes of buildings, a black sky, black hulks of dilapidated houses crushed between apartment blocks.  There are figures, a group of kids on the corner eating sunflower seeds, but all featureless, shades in the summer night heat.  There is a man walking toward me.  I smell the cologne on him before I see him.  And me, lost in shadow.

The lights on the buildings seem to take on significance, they reflect back strange and alien and make me more isolated.  The strange blinking red light on the second floor of one building, the line of orange glowing door bells on the entrance to another, the flickering blue of televisions, the bare white light illuminating bedrooms with people hanging out the window.  It's eerie, these pools of illumination. 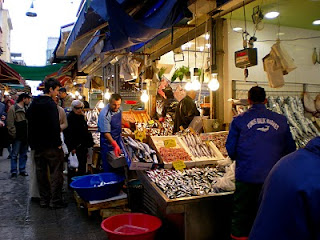 Chris is a young Englishman I occasionally hang out with here in Kadikoy.  Everyone says he looks like Harry Potter, but he's more the love child of Harry Potter and Peter Parker--Tobey McGuire's Peter Parker.  Beardless, whiskerless, round glasses, big innocent eyes.  He looks like a startled elf.  Chris has a reputation for being perpetually perky.  He is never unhappy, never grumpy, never complains.

We are having a beer and talking about odd jobs we'd had as students.  I exaggerate, of course, and turn my interview with the funeral parlor back in '99 into a full fledged summer job.  I describe body pick-ups in the middle of the night, cremations, embalmings.  Chris asks me, "Why would you take a job like that?"  "I'm afraid of death," I tell him.  "And I thought it would be a good way to face it."

This is true enough.  That is why I applied.  He crinkles up his Tobey McGuire face--something about his skin always looks a little too tightly fit over the bones, like it might tear if he strains it--"Why would anyone be afraid of death?"

"It's a pretty common fear, I think," I answer.

"Yes!  It's been motivating people throughout history, or rather, terrifying the shit out of them throughout history.  I mean, it's been an issue for everybody, man.  The ancient Greek philosophers talked about it--the Stoics, the Epicureans.  From Heidegger to the Buddhists to my friend from high school, every philosopher in the world, real and armchair, addresses it.  Hell, it's not just people who fear it.  Try to crush a bug.  It runs!  It doesn't want to die.  Death fear is everywhere, man."

Cats are yowling around us.  It's fish street and the vendors are closing up shop.  Srays are prowling around for heads and entrails.

"Maybe," Chris says.  "I just take comfort in knowing that we all go to the same place in the end.  I think it's nice.  Think about it.  We are all traveling together toward the same end, no one is exempt.  It's rather elegant."

In addition to cat yowls, his words are punctuated by the Turkish pop song on the loudspeakers and the gypsy girl down the sidewalk, playing on her drums and singing folksongs.

"I'm sure it is," I say, "But you gotta understand that a lot of people don't feel that way, and they're in the majority."

"You really think so?"

"Okay, it's a part of life and all that crap, and we all are journeying to the same end, but there's a lot of suffering to get there, often, and I don't like seeing my loved ones go through that.  Or myself.  It's just scary.  Jesus!"

"Maybe it's the unknown," he concedes.  "People are afraid because they don't know what's coming after?"

"Yes," I say.  "The unknown.  Okay, let's say, you're completely wrong.  You're Catholic, but the Jews or the Muslims are right or whatever and so you're going to burn in hell because you cast your lot in with the wrong crowd.  Oops, right?  How were you to know?  But now you're forever in hell.  Just burning and screaming, your skin popping and melting and cracking in the heat forever and ever and ever and ever.  Eternal pain.  You hurt so much you think of nothing else but the pain.  Isn't that scary?"  Ahh, the Baptist in me comes out.  We know hell better than anybody, I think.

He pauses, shrugs, pushes up his glasses.  "If I go to hell, I'll just make the best of it, I guess."

"Yeah," he says in his long, drawn-out British vowels.  He grins, shrugs, takes a swig of beer.  "You know, you're there.  You can't do anything about it.  You might as well look on the bright side.  You could be on a deeper level getting sodomized by a demon or something, someone with a burning sword.  So sit back and thank God you're only burning."
Posted by Jeff Gibbs at 1:46 PM

Email ThisBlogThis!Share to TwitterShare to FacebookShare to Pinterest
Labels: My Lit

That conversation with Chris was one of the moments I remember from the first time in Istanbul. Thanks for painting it back in my head so vividly.