The sun has winked out of the sky, and all the bright light--it's all sunset pinks and cool blues now, and boys' voices shout up from the street--a pair moving down either side calling out to each other.  The sandy slide of a ball skiffed across the pavement.  They've all bought ice cream, lemon pops, and they make their way down the narrow sidewalk tossing rocks, kicking plastic bottles, and stopping to pick up bits of shiny metal which they investigate--all the while licking at their lemon pops, dark yellow tongues--before discarding with a backward toss.  At one point, they stop to watch a cat take a shit.  One of the them squats down to get a better look.  The cat turns its back to them, its ears flattening in annoyance.  A group of teenage boys pile into a car blasting bass from giant speakers in the back.  A girl in a black tank top walks fast toward the main road, ogled from the right by a kid smoking on his stoop and waved at from the left by the middle aged man who runs the convenience store on the corner.  Old men play backgammon on tables on the sidewalk--the stones click on the board.  The neighborhood twilight has life, movement, light, sound.  It's like my old Florida neighborhood--the heat in the day breaking, we kids playing kickball in the street, neighbors shouting to each other as they water their lawns.  I barely remember being a kid--the feeling of it--but I ghosts of feeling move through me sometime, seizures of sensation, like when I see the one boy's tank top, dusty and bright blue, the iron-on letter flaking off, and then look down at his bare black feet.  More than memory is triggered.  I blink and I am there, eight again, wearing the same thing.  He shouts, "Abi, bak!"  Look man.  And his friend laughs.  The whoosh of traffic on the main road.  The beep of horns.  The sudden burst of the ezan.  Allah Akbar!

Turn down the alleyway, cross the parking lot, the right lane.

A line of roses down the median makes a stripe of red all the way down toward the peach and wine fire sky, the colors framed by the bushy green of mulberry trees that line the road and the neon sign of the Nautilus center.  The hunch back Gypsy woman--no more than four feet tall--sits and waits for the light to change so she can sell packs of tissue to stopped cars. She wears a turquoise sweater and an orange checked skirt, and nibbles sunflower seeds with a bored scowl as cars whizz past her.  She's respected around here.  Shopkeepers call her hanim and teyze (madam and auntie) when she passes.  She stops to chat with them sometimes.  She walks with a cane  because her back is bent nearly 90 degrees.  Huge black eyes like pools of dark tea.  Above her, a moon the color of luminous vanilla ice cream has just cleared the tops of the middle school on the corner.  It's brightening with darkening sky, whiter and whiter and whiter.  A screech of brakes, a cat meowing from the fence on the edge of the graveyard shadows.  The crinkle of a plastic as a man loaded down with shopping bags hops across the median and makes a dash for the other side.  The ezan is reaching a crescendo.  Haya 'alas-salaaaaaaaaaaaaaaaaaaaah

Left lane.  Down the sidewalk and turn right, over the bridge.

There's a pretty Gypsy girl in green with a lithe body and dusty skin.  Her face is an all-business scowl--she's collecting cardboard boxes from piles of garbage in the street.  She has a three-wheeled cart that she pulls around with a huge white muslin sack tied to the back.  The handles of the cart are so tall that when she lets go of it, they snap up above her head and she has to jump up to pull them back down.  She wears a long flowered skirt and has long messy black hair, streaked here and there with red.  She has long, skinny pale arms that work like pistons as she rapid-fire folds the boxes into shapes that will fit into her bag.  She is collecting from a load of trash next to the parking lot where my favorite old dog lives.  Old yellow.  He sits on the pavement all day and ignoring everything around him with sleepy eyes.  Blinking and blinking, wearily.  Sometimes, I'll scratch his head and he'll close his eyes all the way until I'm finished and then walk me home.  The ezan has stopped, the last echo dying away.  There's a chorus of car engines now, the quiet chug of a cab, the high whine of a moving trunk speeding toward the light, the rattle clatter of a minibus, the muffler burps of an old Subaru.  A motorcycle bounces over a grate and honks his horn.

Down past my old school, past the bakery and minibus road onto the pedestrian walk where cars go anyway

An old tree, leafless and rough skinned, writhes from the pedestrian road next to the tea shop.  A pile of bikes tangle against a light pole.  Three teenage girls pass by with a basketball, the thick shouldered one in the lead dribbles and walks fast, making the other two have to trot to keep up.  Light radiates out in a circle of white from the cafe.  It doesn't quite reach the tree.  A woman sits at a table outside, her feet kicked up on the chair opposite her.  A little boy charges up to her, too much momentum to stop himself and so she catches him and whirls him into the chair next to her.  "Mommy!" he cries.  He's got a Sesame Street shirt on and oversized shorts.  A man in a football jersey lopes up behind him, hands digging in his shorts pocket, and says, "Ahh, so you'd rather sit with Mommy!"  The sound of spoons stirring sugar into tea glasses.  Shopping cart wheels rattling across bricks.  A man jingles keys in his pockets.  Techno music thump thump thumping from a clothes shop across the street.

A little girl in pink--shorts, T-shirt, sandals all a bright bubble gum--reads in front of a rack of purses hanging outside a women's wear shop.  A glass case filled with more purses stands behind her, illuminated in bright naked bulbs.  She brushes a swath of black hair behind her ear and kicks at the ground as she reads.  Her father--a pot bellied man in a tight white T--closes up shop behind her.  One by one the lights blink out and she bends closer and closer to the page.  She sniffs and drags a finger across her nose.  There's a chorus of footfalls, a legion of shoes.  The clunk clunk of heavy boots, the pad of a child's sneakers racing across the cement, the shuffle of sandals, the lazy snap of flip flops, the rapid click of heels.

To the end, where we empty into the main road

The Fountain of Lord Halid, 1794.  It's an old Ottoman fountain, cool white marble inscribed with flaking gold Arabic letters and floral flourishes.  The spigots have long run dry.  It has been graffitied all over.  Black letters right across its belly have all been scrawled out, save the words ederkken ("while doing") and lan (something like "hey, asshole").  There's a Wienerwald scooter parked in front--a plastic green box on the back with the white logo of a giant chicken.  To the side, the green ATM of Garanti Bank.  A girl stands on one leg in front of the screen, kind of pivoting left and right as she types a number into the console.  Beeps.  Her other leg lets her sandals almost fall, but she catches it with her toes.  Her purse hangs from her elbow.  The light from the screen illuminates her face and neck in a pale green.  A second Wienerwald cycle whizzes up and parks next to the first.  The driver wears a huge black helmet which he whisks off to replace immediately with a green cap.  He's tall and slumps as he walks, loping into the bright light of Wienerwald with his heat-sealed food bag swinging from his right hand.  He strides past a woman with dish-sponge blond hair, spooning pudding into her mouth.  Cell phone conversations.  Car horns.  The hum of the freezer of an ice cream vendor.  The electronic voice of radio news.

The sky is purple black now.  The moon a luminous ball of white over the stature of the bull.  (Everyone waits here, for lovers, for friends, for dates).  Venus hangs on the other side of the sky.   A cat stops to watch me write--a skinny black and white thing.  Its ears won't stop twitching. 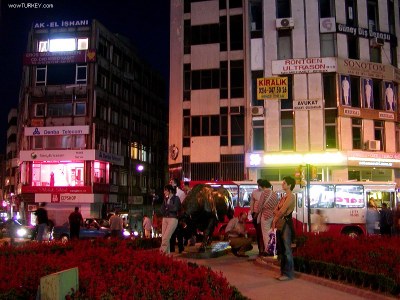