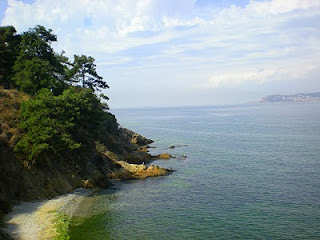 Sunday. A warm wind and the sun bright in the morning. I went down to the seaside to sketch the sailboats pouring out of the marina docks. Hundreds of them on the horizon, turned every which way. The Marmara looked like a page from a trigonometry book, triangle sails facing me, turned away, curved in the wind, slightly angled to the right and left, turning left and right, fluttering. Acute, obtuse, isosceles, equilateral, jigs and mainsails. White on dark sea blue. The sky was milky with haze. You could see the mountains near Izmit floating as vague gray shapes above the water. Even the freighters far out to sea looked like they were drifting on white cloud.
The park filled with flowers, pink cherry blossoms, bright yellow dandelions, blue clover blossoms.
At night, Delal and I went to Moda Teras, a fancy restaurant on a bluff with a sweeping view over the Marmara and her islands. A black storm was rolling off the European shores. We watched the shadow creep across sunset pink clouds, over the old Sultan's palace and Hagia Sophia before starting over the water. Lightning flashes. It looked like summer. And on the way home it rained furiously, big-drop warmish rain, not that winter drizzle that has depressed me for the past month. We took shelter under a bus stop and talked about the storms back home--me Florida storms and she Bingol storms, about how frightening the thunder is, like bombs. The football match between rivals Galatasaray and Fenerbahce had just finished and cars were blaring their horns. Fener had won. Rain on the plastic roof. A huddle of men smoking and talking furiously about the game.


Sun. Fire. Flame. Heat. Scorch. Glare. White. Light.
Summer. May.
The tourists are here. A group of Germans took over a fish restaurant last night. There were Brits wandering the bars. Tourist sites make everything seem unreal, like a set. They take pictures by the old Ottoman wharf. "Old Ottoman". "Ancient Byzantine". Those words fly around here as thick as the gulls and crows.
Everyone's ready with a history lesson. There are ancient Byzanine walls, ancient Byzantine cemeteries, ancient Byzantine churches and towers, Old Ottoman fountains, Old Ottoman mosques, and graves, but the only thing real is me, longing for my imagined home, for my Florida swamps and fireflies. The air is still. The sky is white. The rooftops wrinkle with escaping heat. The junk peddler is calling up from the street. "Eskiiiiiiiiici." He's got a cartload of plastic toys, a vacuum cleaner and some books.
A hammer. Clank. A gull squawk. A dull traffic roar. The rumble of a truck going by. A neighbor beating her rug. Thump. The toddler next door squawling.
This is a moment, a frame, a piece of my mind--gone already.
I cut my fingernails out on the balcony. It seems like a did it yesterday, but here they are back again. Is this how time is marked off? Hair cuts and beard shaves and season after season. Tick tock tick tock, routine cycles rolling us toward the end of the show?
Posted by Jeff Gibbs at 10:15 AM