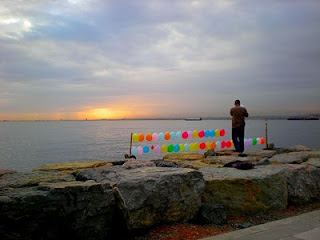 Yesterday was an odd Sunday. I spent two hours doing something I never do--chatting online, but it was with two old friends I haven't spoken to in ages, and I came out of the rather harrowing conversations (at least in the case of one of them) feeling a deep sense of relief. I needed to walk, and so I left my apartment and headed down to the sea. On the way is an old graveyard next to the parking lot of Fenerbahce's giant soccer stadium. When you walk by at night, you can see a green light (the color of Islam) glowing from a tomb right by the fence. There is always a night watchman there. But this was during the day, and though I have walked by this cemetery a million times, I have never stepped inside.
The glowing green grave is apparently the final resting place for a local minor saint. You find this sort of thing more often in rural Anatolia, but they are in Istanbul, too--dervishes and holy men revered for their wisdom during life, and now seen as protectors in death. An old man in an army green jacket was outside the fence praying when I came. Inside the cemetery walls is all leaf and grass and ground gnarled by tree roots. Most of the grave markers are written in Ottoman--using Arabic letters. A small black and white kitten ran up to me as soon as I passed through the entrance and walked with me through the cemetery, at one point trying to reach my head by scaling my legs and trunk. A monolith at the entrance was to a man called simply "Milli Sehit Kemal Bey". National Martyr Kemal. He had fought at Gallipoli and been some sort of governor at Izmir, but was driven out of power by the postwar occupiers, their political "lackeys", and "Armenian agitators." In light of the recent turmoil over the genocide recognition in the House Foreign Affairs Committee, it makes me wonder just what it was he was involved in.
The path to the sea takes you past many relics of the past. Next to the train tracks is an old crumbling hamam that used to belong to an Ottoman millionaire. It is covered in graffiti and still surrounded by apple and cherry trees, blooming now in our unseasonably warm weather (survivors of the millionaire's garden?). Old Japanese poems used to compare the flowers on these trees to snow, and with all the other trees bare of any leaf whatsoever, they do indeed look like remnants of a fresh snowfall. There is also a creek once named Turtle Creek, but not referred to mostly as Shit River because of the smell (my high school students had no idea it had a different name). It winds from the Asian hills down past the stadium to the Marmara Sea.
The sea has been gorgeous recently. The colors on its surface like thick oil paints--today it's silver and cobalt blue. Last week, when I was jogging, it was a heavy purple. A storm is coming in. The weather is so strange here. On the European side it might be sunny, while on our side its pouring down rain. On the south side of the European shore there might be no wind, while on the north it's blowing hard. It's like this today. This makes the rain falling on the opposite side do odd things. To the West, where the sun is setting, the rain is coming straight down out of the clouds. And its a deep, black-red on orange sky. More easterly, toward the palace museum, the wind has bent the rain severely to the right--nearly at a 45 degree angle--and its dark gray on purple. Yet it's still clear blue sky above me on the Asian shore. The water is filled with black moorhens and white gulls. Cormorants are diving for fish. The seaweed is an electric green (though this color is made possible by the 'nutrients' flowing out of Shit River). Piles of it grow around orange rusting pilings.
The winds in Istanbul are fierce, stronger than Boston's even. They each have a name. Poyraz is the Northeast wind. Lodos is the Southwest. There are others, but these are the main ones. Both are responsible for ramming ships against the shore. You can see several wrecks from Kadikoy all the way down to the entrance of the Bosporous. According to legend, there was once a king on the Asian shore who fell afoul of the gods somehow and was tormented daily by the Harpies. One day, the wind gods' ship landed in the kingdom and the king begged them to help him get rid of the Harpies. To this day, Boreas (Poyraz) and Lodos chase the Harpies around the Marmara sea and when you feel the wind hurling rain and waves against you as you walk the shore it is from the power spilling out of their battle.
On my way back from the sea, I pass by the fishing shacks along Shit River. One man, a jazz looking dude who wears a beret, sports coat, and has a goatee, has a pet rooster and duck that sit next to him like dogs as he listens to the radio and reads. A few men are tending to their boats. And Lodos is raging, making the masts tilt left and right and the duck croak in annoyance.
Posted by Jeff Gibbs at 9:03 AM

I noticed the sky before I headed out that afternoon. It was quite eerie, like I was looking through a filter. Jon said his students were freaking out about it because it was a sure sign that "the" Istanbul earthquake would happen yesterday. Uh.

If Jon's students are anything like mine, they are lucky to be walking without their knuckles dragging the ground...then again, I guess animals are supposed to know better than us when an earthquake happens.

Well, from what I've gleaned, one peed in his class today. IN the classroom. Your descriptions are quite accurate.